What happens when social media combines with the sale of either an Apple iPad Mini or Microsoft’s Surface 2 tablet? The result is an interesting affair with one 12 year old girl ultimately buying Microsoft’s product after initially being drawn to Apple’s device but being ‘convinced’ by Microsoft not to buy it.

The story of a recent Surface 2 purchase has gone viral, after the father of the 12 year old girl informed Microsoft and Samsung about his daughter’s plans to buy an iPad – challenging both companies to offer reasons why they shouldn’t go ahead with the iPad purchase.

While Samsung appears to have stayed silent on this story, Microsoft did however decide to take action, much to the surprise of the girl’s father and the 12 year old girl herself.

Microsoft not only took on the challenge, but they did so in a similar format to which the little girl used as well, to make it all the more special. The conclusion was that in actual fact, the girl decided to change her mind after personally accepting Microsoft’s invitation to visit their store and see a Surface 2 close at hand. 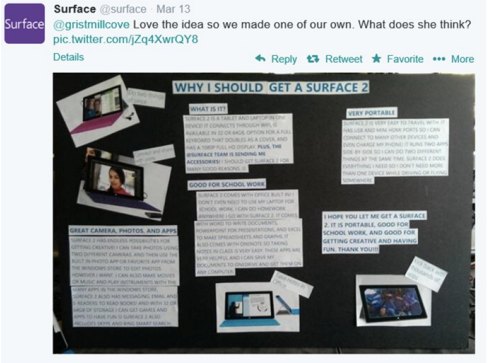 The whole story has been detailed by Microsoft in a blog entry here, while there is also a rather cute video to check out too showing the whole thing.

Do you think the girl made the right decision to shun Apple and buy a Surface 2 over an iPad Mini? Let us know if you have previously faced the same choice and what tablet you decided to buy between the two.