Don’t listen to all those people who tell you that the wearbles market is not going to amount to anything because things have already started to hot up. When you get companies like LG, Motorola and Samsung, you know that a new market has been born, and even though Sammy has the most wearbles out at the moment, we can’t help think the Moto 360 will be the best of that bunch.

Greater smart wristband choice — It was reported last week that Microsoft looks set to enter the fray when it comes to the wearable market. From what we can tell this will be more of a fitness device rather than an all-out smartwatch, although this could change, as we get closer to its release- unless Microsoft releases two devices?

According to the rumor, the Microsoft smartwatch, or wristband should be released in Q4 of this year, which is around the time Apple should release the iWatch.

We are told Microsoft’s version will resemble the Gear Fit, which we have included an image of above, but as for the iWatch, we still have no clue because there have been conflicting reports.

Apple could go the Samsung route and release a fitness band, which could look a lot like the image you see below, or a smartwatch that looks like a more premium version of the Moto 360. Then again, they could launch both in Q4 2014. 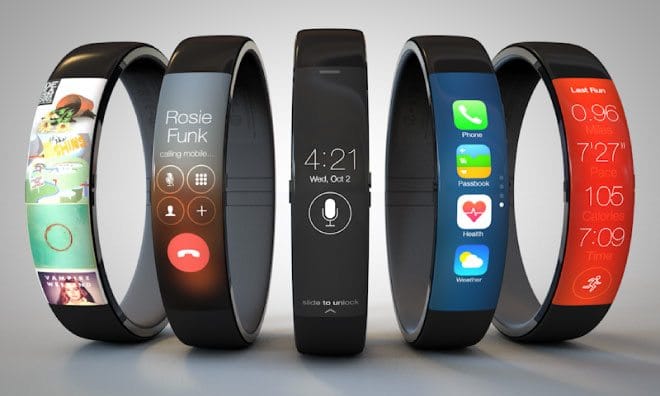 Apple should release both, as we know they have had meetings with some of the big names in the sporting industry, along with experts in the exercise industry, making this a perfect Apple fitness wristband.

As for the iWatch itself, we know Apple has hired plenty of people from the world of fashion, as well as hiring a TAG Heuer executive, which tells us we should expect something with a highly premium look and feel.

Do you believe that Apple and Microsoft will launch two separate devices, one aimed at keeping fit, and the other to complement their smartphones?