Microsoft has a lot to meet when it comes to breaking the dominance of current phone leaders, and just how they will meet and gain the lead is anyone’s guess, although we’ve seen Microsoft thinking out of the box with a new patent which in our opinion would be a massive hit in today’s high-end smartphone world.

At the moment if you want a high-end smartphone you have probably noticed that there is a lot of hype surrounding the next-gen iPhone and the Nexus Prime, the patent which we speak about below is unlike anything we have ever seen a smartphone offer before, also as Microsoft filed the patent it looks like it will be exclusive to devices which run on Microsoft software such as Windows Phone 7

The patent in question recently showed up on Engadget and if you are in to patent specifics you can the United States Patent application here, however if you just want to find out what this patent is in an easy-to-read manner keep reading our post. We are by no means experts in patent submissions, but we think we have a good enough idea as to what the patent entails.

Let’s start with an image which quickly gives us a glimpse of what the patent allows for: 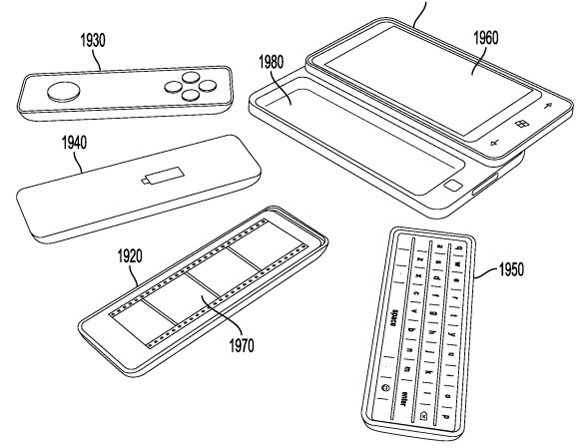 As you can see it appears to show a Windows Phone 7 smartphone with a slide-out mechanism – however instead of featuring a physical QWERTY keyboard it features a well where different devices can clip into. In the image above the ‘1980’ represents the well, whilst 1920, 1930, 1940, 1950 and 1970 interchangeable devices which can fill this gap.

1930 shows a game controller, 1940 shows a battery, 1950 shows a QWERTY keyboard and 1920 / 1970 represents an additional display which can be removed and communicate with the smartphone wirelessly. We aren’t going to worry about the practicality of the idea just yet, or the pricing, however instead we are going to ask you what you think of the idea and if you are impressed by the idea – so feel to share your opinions on this patent in the comments section below, could such a patent be a major part of Window Phone 7’s success? Or is it a gimmick which won’t work in the real world? So many question so few answers..