Three of the most popular phones in India right now are the Micromax Canvas Nitro A310, the HTC Desire 816 and the Galaxy Core 2. Samsung’s handset may be the oldest of the bunch, but it is still proving popular in the Indian market because of its value for money in terms of specs and features. Seeing as though some of you may be about to purchase a new handset, but are unable to make the right decision, we thought we would help you out a little by pointing out the specs and price, and also show you three reviews that showcase the good and bad of each of the three handsets.

Micromax Canvas Nitro vs Galaxy Core 2 – The Samsung Galaxy Core 2 was released around April of this year, while the Micromax Canvas Nitro came to the market earlier this month. Whenever a new smartphone hits the market in India, it will also be pitted against one that has done very well over the months and still sells well. However, Indian buyers need to know if it is with making the jump to a newer, larger model, as well as knowing what the benefits are, and those negatives. 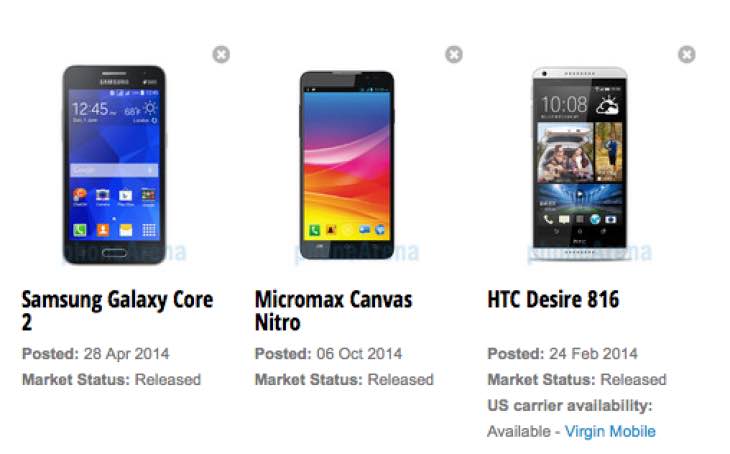 Micromax Canvas Nitro vs. HTC Desire 816 – This comparison is going in the other direction because instead of having a smaller handset to compare the new Canvas Nitro to, we have one that it 0.5 inches bigger. However, these two do seem more evenly matched in terms of specs, especially their cameras, although with the former being a newer model, hardware improvements are to be expected.

The camera showdown is pretty similar for two of these handsets, with the Canvas Nitro and Desire 816 making use of 13-megapixel rear cameras and 5-megapixel up front, compared to 5MP rear-facing camera and VGA up front.

To get a far better picture for these three handsets we ask that you view the three videos below that offers greater insight. Once you have watched all three you should be able to get an idea of which of the three smartphones is the greater value for money. Just for the record, the Micromax Canvas Nitro price in India is Rs. 11,800, the Galaxy Core 2 Rs. 9,900 and the HTC Desire 816 Rs. 23,000, which is a lot more.