With the Micromax Canvas 4 Plus A315 being one of the latest handsets from the Indian smartphone maker, we thought we would point you in the right direction of some advice that compares it to two other models from the brand. The two other phones are the Gold A300 and Nitro A310, both of which are pretty decent phones and are sure to cause a headache for consumers in India that are undecided which is the best model for them.

Micromax Canvas Nitro A310 vs Micromax Canvas 4 Plus A315 – This first comparisons is not a full on review, but rather a rundown of their specs and features and how they compare to each other. Both handsets were announced in September and have the same display size. Looking over the main specs, such as processor, and GPU they are rather similar. 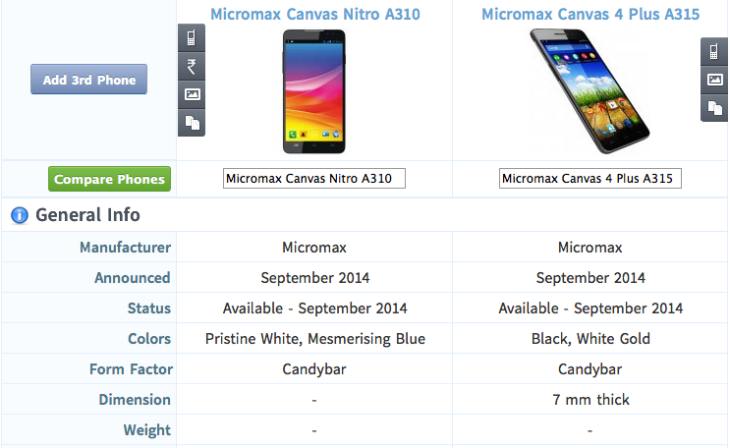 However, there are several differences, such as different storage options and display technology, the Nitro A310 makes use of a IPS LCD Capacitive Touchscreen, whereas the Canvas 4 Plus has AMOLED Capacitive Touchscreen, although they do achieve the same visual quality. For a complete comparison please visit the Micromax website. Although you will need to select the two handsets in the comparisons boxes first.

Micromax Canvas 4 Plus A315 vs. Gold A300 – The next comparison is a little different as the latter handset seems to have the edge in terms of certain specs, such as a faster processor, 1.7GHz Octa core compared to a 2 GHz Octa core. The screen size is 5 inches for the former and 5.5 for the latter. The Gold A300 even has a larger battery for increased life.

You can also visit Micromax and select smartphones, Canvas and then select compare these two handsets to see which deserves your money.