All the attention may be on Final Fantasy XV right now and of course Final Fantasy Type 0 HD, but we’re here to remind you that Square-Enix also has a promising mobile game coming out this year too, called Mevius Final Fantasy.

This game is going to be unlike any other mobile game that Square-Enix has released. This is because the developer is aiming to be the first to deliver ‘home console’ like graphics onto mobile platforms.

Some initial preview footage released at the start of March gave you an idea of this, with many fans shocked at the level of quality available and wondered how Square-Enix could make it possible technically. 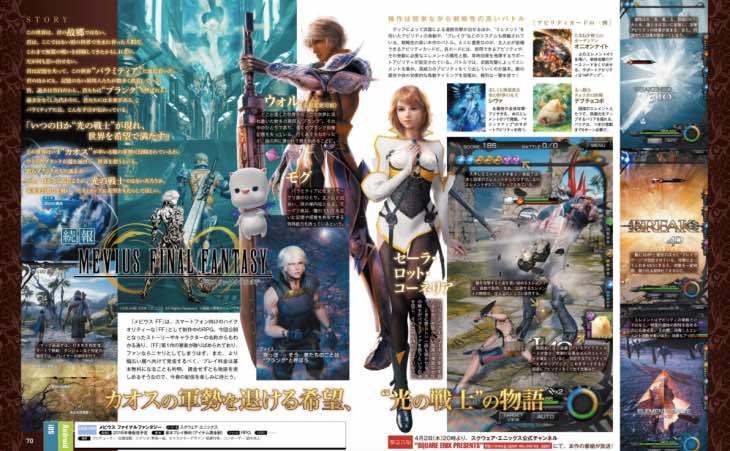 The big question that many Final Fantasy fans are asking though (us included), is when the Mevius Final Fantasy release date in US and UK will be.

As far as we’re aware, Square-Enix is only committed to releasing the game in Japan and we’ve heard that the game will be available sometime in Spring.

After that it will obviously take some time to localize the game for the West, so hopefully Square-Enix can get that wrapped up by the end of the year.

Another mystery that needs to be answered is how will the game be monetized. We know that it will be a tactical turn-based game, but will Square-Enix make it free-to-play with micro-transactions or charge a one-off fee?

These are all questions which will be answered soon with the next preview of the game. For now, remind yourself of the brief footage that we have seen so far and let us know if this is one mobile game that you would love to play in the US or UK.

The image above is from the recent Famitsu scan, courtesy of All Games Beta. You can zoom in for a closer look at the two pages of content here.