If you have been keeping yourself updated on all of the ongoing Apple iPhone 5 rumors, you’ll know that the company may use their sixth generation model to introduce a complete design overhaul for their next iPhone. We now have an update on when the device may release in 2012, and also more evidence that aluminum materials will be used.

A fresh article has been published on the status of the iPhone 5, and the report by BGR claims that Apple will launch their next iPhone in Fall 2012, around the same period that the iPhone 4S was released a few months ago. Their source for the information has led to the tech site being ‘confident’ that this information is true, but we all know that Apple rumors are highly likely to change, especially ones that mention a new iPhone device almost 12 months before an alleged release.

As for the design, we are once again hearing strong rumors that the iPhone 5 will feature an aluminum back casing. However, new information reveals that we could be seeing Apple introduce a new rubber or plastic material that will also feature in some way on the back of the device. This could be used to make the bezel for the iPhone 5, and will see a similar method used for the iPhone 3GS which also featured a bezel around the edges of the device.

With four generations of iPhone released so far, it’s been a ride that has both been enjoyed as each generation adds new features and also one that has had a few problems along the way, including signal issues on the iPhone 4. The iPhone 4S felt the most solid since the first generation iPhone, which had a metal back and made the device feel heavy, and some of us liked that.

The 2nd and 3rd generation iPhone’s went with the plastic back, which some of us hated at first but soon grew comfortable with. We’re now hearing that Apple may go back in time a little, and while styling the iPhone 5 release a lot better, they may also use a lot more metal. Below is an example of how the iPhone 5 may end up looking, courtesy of a mock up design by BGR. 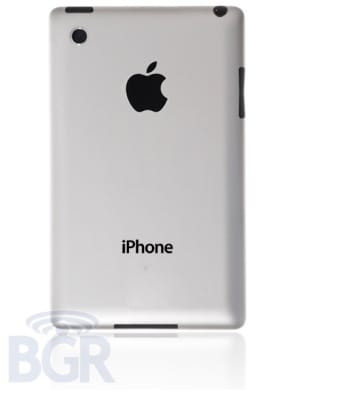 How do you feel about a new aluminum-based design overhaul for the iPhone 5? Would you be happy to see a rubber or plastic bezel on the new iPhone, or would you prefer Apple to maintain their winning design formula used on the iPhone 4?