There are a number of complaints coming in this week from Metal Gear Survive owners who are unhappy about Konami’s decision to charge players to make use of a second save slot.

In other words, if you want to use a second character slot in Metal Gear Survive to have an extra save slot, you will need to pay for the right to use this.

Konami has set the pricing at £7.99 or $9.99 for a second save slot as this translates to 1100 Survival Coins which you need to pay real money for.

As you can imagine, this hasn’t gone down well at all with the player base and now you should be extra careful when choosing your first character, as if you are unhappy with it later on in the game it won’t be easy to change it unless you cough up with the cash. 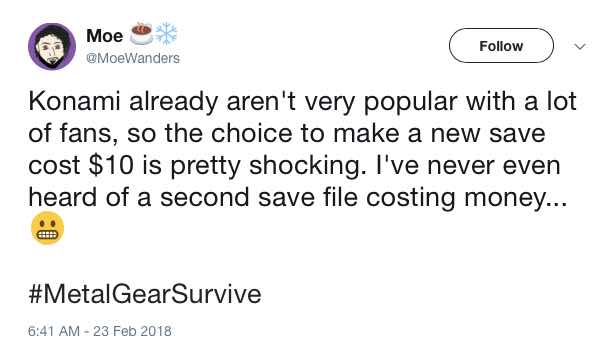 You can see an example of just some of the feedback going out on social media at the moment and there is a lot of it.

If you have the game, let us know your honest feelings about this. Are you outraged by this decision by Konami or are you willing to slug it out via the daily login bonus to get your hands on the second character slot?