It looks like Metal Gear Solid V is going to release without David Hayter as the iconic voice of Solid Snake. Or that is what Hideo Kojima has led us to believe so far, a man known to have a few tricks up his sleeve. Either way, Metal Gear Solid V is coming to E3 2013 and Konami has just sent out a new teaser, telling the world to prepare for the new voice of Solid Snake.

There are some who are still very upset over the David Hayter situation, with many simply refusing to buy the game if Hayter is not included. However, there are also some skeptics out there who believe that it could have been a game all along, and Hayter will still emerge as the voice of Snake and Big Boss.

After all, Hayter has played Snake since 1998, so it is very hard to imagine a new game without any involvement whatsoever from the actor – a feeling that many of you share at the moment. This week, Konami has sent out a new video, asking us ‘Who will be the new voice of Snake’? 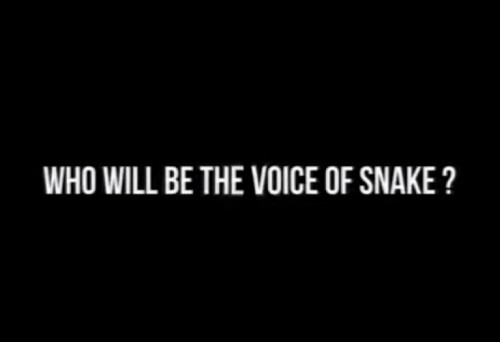 The teaser points us in the direction of Konami’s pre-E3 2013 event, which will begin on June 6 and will be aired by GameSpot. A live stream should be available for this event, but we’ll confirm exact details as we get it. At the very end of the trailer, we see the hashtag #Keptyouwaitinghuh, which suggests that Kojima is still having his fun and games at our expense.

Do you honestly believe that David Hayter has been axed completely, or do you still think he will end up voicing Big Boss and Snake? Watch the short teaser above and let us know what you think. Simply put – are you still buying Metal Gear Solid V if it doesn’t include Hayter?