We have some good news for those of you planning to pick up the next Metal Gear Solid game, as we are hearing of a rumored release date for the Xbox 360 and PS3 – it could be landing next July.

As reported from VG247, the information has surfaced from GameStop, as an early listing for the game has showed up online, perhaps revealing the possible release date a little earlier than Konami had hoped.

According to their page, Metal Gear Solid: Rising will be releasing on July 3rd in the US, which falls on a Sunday – not the usual release day of Tuesday. Interestingly, the information is still online on their website – view it here if you want to see it. 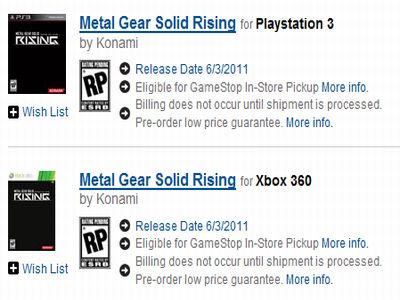 Of course, it’s not the first time that leaked release dates have appeared online at GameStop before a publisher announces it officially. Another thing to point out for Metal Gear fans, is that GameStop are also usually spot on when it comes to posting online launch dates.

As an Xbox 360 or PS3 owner planning to get the game next year, what are your thoughts on the date? Is July 3rd earlier than you had expected? Hopefully we hear from Konami soon regarding this. Don’t be too surprised if the date is pulled later on today.