Over the weekend, intense speculation was brewing suggesting that we could be seeing Metal Gear Rising 2 as a PS4 exclusive. This was after Sony aired a trailer at the Taipei Game Show, briefly showing a logo that looked similar to that of the Metal Gear Rising series.

You can see the image below, then understand why many gamers instantly thought that it was related to a new game coming from Platinum Games and Konami.

With this logo flashing for a split-second during a PS4 highlight reel, some had even interpreted it as being a PS4 exclusive. 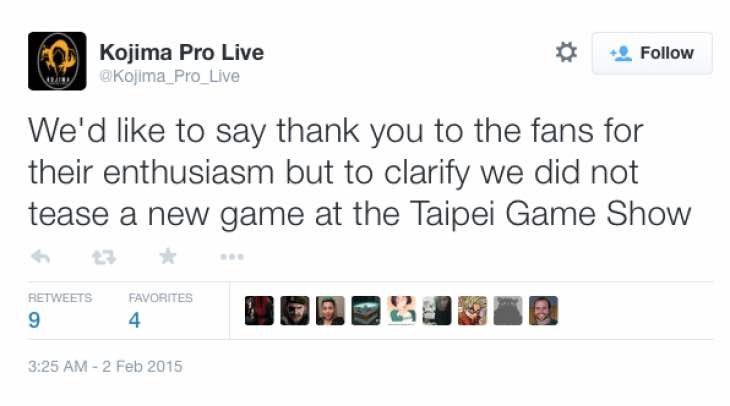 As exciting as this would be for PS4 owners, it looks like it won’t be happening. Konami has just tweeted minutes ago to confirm that while they appreciate the enthusiasm shown by fans – there is no new Metal Gear Rising sequel coming from them at this point.

If that is not a sudden end to these rumors, we’re not sure what is. Amusingly though, we still see that some are saying that it is still a ‘ruse’ in order to build up hype towards a possible reveal at E3 2015.

Either way, Konami has spoken so let us know what you think about it. Platinum Games has shown that they are open to platform exclusives with Bayonetta 2, so what would your reaction be Xbox One owners, if MGR2 comes to PS4 only?