EA has given FIFA 15 players once last treat before the TOTS handouts end for another season. We have had the individual TOTS league cards, but now it is time for the ‘Best of the Best’ EA Sports TOTS team.

These are the players that have been hand picked by the developers themselves, based on performance that EA deems worthy enough for selection. The big surprise though is that EA Sports TOTS Suarez is nowhere to be seen, despite the player having an amazing season for Barcelona along with Messi and Neymar – Suarez was included in the La Liga TOTS remember.

Messi and Ronaldo are selected but there’s also a few questions raised on how Zlatan Ibrahimovic is missing too, as is Sergio Aguero. 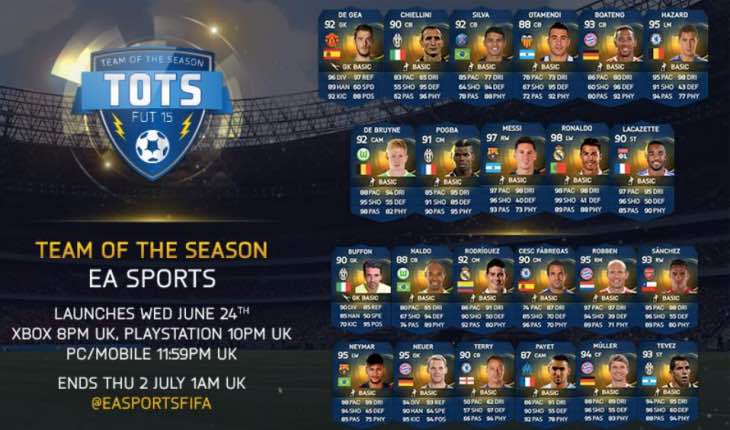 EA obviously can’t pick everyone in the main team, but surely Suarez deserves a place in that lineup ahead of Alexandre Lacazette?

The debate is now going on via social media and we can see that many FIFA 15 FUT players are asking EA the same question.

Let us know how you get on with EA Sports TOTS in packs, as they should now be active for PS4 and Xbox One players. Do you agree that no Suarez is a strange choice?