Did you tune into the highly anticipated Super Smash Bros Direct? Nintendo didn’t disappoint with their latest event and we can confirm that the new game is going to feature a heavily influence from Pokemon X and Y.

Nintendo has released an awesome new Smash Bros trailer from their Direct event, showing Charizard in action – it’s unmissable if you are planning to get the game.

What you may not know though, is that Mega Charizard X has also been confirmed for the game. Charizard’s mega evolution from Pokemon X is going to be included in the game as Charizard’s Final Smash in Smash Bros Wii U and 3DS.

If that wasn’t good enough, Nintendo has unleashed another surprise. Also included in the same trailer below is the unveil of Greninja. The final evolution of Froakie from Pokemon X and Y is also going to be playable in Smash Bros – you can see his Smash Bros design in another image below. 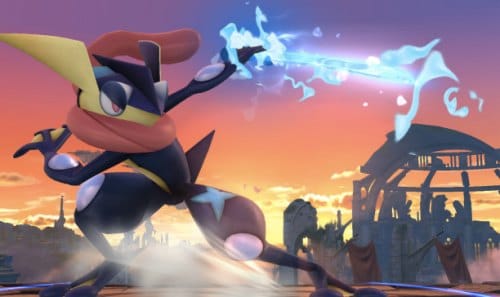 As far as we’re aware, there are other Pokemon reveals to come so don’t worry if you are thinking that there will not be any more. Smash Bros Wii U is due out this Winter, let us know what you think of Mega Charizard X being included as the Final Smash move.