We’ve already seen the McLaren P1 specs and how they compare to the Ferrari LaFerrari, but we’ve not seen much footage to show us how the car behaves around the track, well apart from a very conservative drive around a track with Sergio Perez.

However, a new video has just been released where the McLaren P1 handling is pushed to the limits on a surface far different to what the hypercar was designed for. The reason for this was because the Woking, England outfit needed to give the P1 some much needed winter testing, and so took their latest creation to the Arctic Circle. 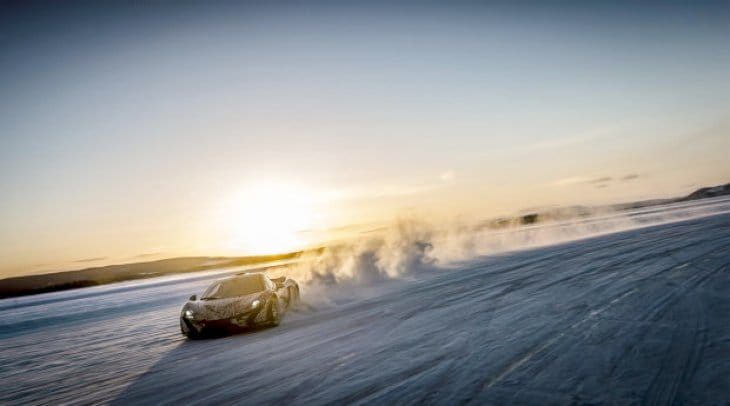 Okay, so it’s not like one of the 375 owners will ever use their P1 in such conditions, but durability testing like this is nothing new as the likes of McLaren needs to learn how their vehicles will react in such extreme conditions – well that is what they say.

There is said to be more testing ahead of the first delivers in a few months time. McLaren is renowned for their attention to detail, so seeing the images of the P1 racing around in these arctic conditions is no surprise.

I do find it strange why the McLaren P1 is still adorning its camouflage, and the fact that this looks more like a photo opportunity than a handling test. If you would like to see this hypercar in person, then the McLaren P1 will be attending the Goodwood Festival of Speed this year.