Have you played Street Fighter IV to death and are looking for a new challenge? If the answer is yes, then you’ll be glad to hear that Street Fighter X Tekken will be available from next month, giving veterans the chance to beat up opponents from the Tekken franchise for the very first time.

Just like Street Fighter IV though, you’ll need to be something of a fighting seasoned pro, as there’s no sign of Capcom easing up on the difficulty stakes in order to make this crossover game more accessible to those who are not used to playing fighting games regularly.

We have taken a look at some early combo videos for the game and if you’re a beginner – it’s fair to say that you better start learning some combos as soon as you can otherwise you are just going to get annihilated the moment you get launched into the air. YouTube user DESK is a something of a Street Fighter expert and he has already managed to have a detailed play of the game before its release next month.

He has wasted little time in trying out some combos on the new game and he has uploaded a video of his results which we definitely recommend you check out. To put this in perspective – the game isn’t even out until March 6th, but there’s one particular 63 hit combo at the end with Chun Li which tells you all you need to know about this game – practice hard or risk damaging your controller when you throw it against the wall. 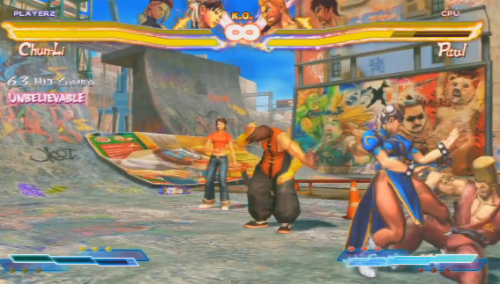 Aside from the Street Fighter character combos that we’re all used to seeing, the video also provides a look at some of the tasty combos that you can pull off with some of the Tekken characters. There’s a nice combo from King in there as well which ends with one of his trademark mid air grapple moves which you would have seen if you play Tekken regularly.

Watch the video for yourself below and let us know your thoughts on it. Does it make you even more excited about the release next month, or are you now slightly a bit worried that you’re going to get it handed to you the moment you step foot in the online servers?

How good are you at performing combos – would you recommend a fighting stick or not?