Ever since its grand unveiling at E3 2011, we have seen nothing from Halo 4 since, as Microsoft prefers to keep Master Chief’s next project a close kept secret. However, one aspect of Master Chief that is getting everyone talking is his appearance in the upcoming game and we now have a clear indication on how he will look in Halo 4, thanks to none other than a toy figurine.

If you didn’t already know, Halo 4 will be the first Halo game to be developed by 343 Industries, as Bungie has now officially stepped away from the franchise as promised. Halo 4 is actually set to be the first game in a reboot trilogy, so we should expect to see a lot more from Master Chief in a possible two more games from 343 Industries after Halo 4 lands.

We know that the game will be due out during the 2012 Holiday season, but Microsoft has not released any other details at the moment. We’re guessing that the next big reveal will come at E3 2012, but in the meantime, we now have a glimpse at how Master Chief’s in-game appearance may look like, thanks to the release of a few pictures for the official Halo 4 Master Chief action figure, courtesy of the official Halo website.

The figure has been designed by McFarlane Toys and as you would expect, it looks pretty awesome and a must have collector’s item if you have picked up previous merchandise in the franchise. Compared to Master Chief from Halo 3, we see that the hero’s armor has been upgraded with some funky looking shoulder pads, while there also seems to be a heavier emphasis on the stealth-style exoskeleton suit, which dare we say it bears some resemblance to stylings from good old Solid Snake from the Metal Gear Solid games. 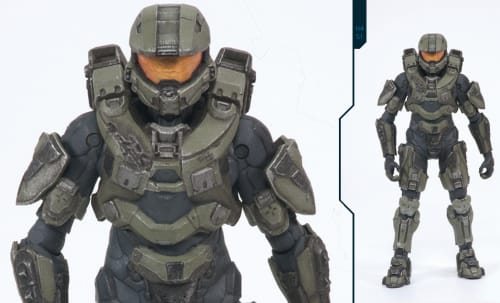 Does this mean that Master Chief will have some brand new stealth-based abilities, or are we perhaps getting a bit ahead of ourselves? It’s too early to say of course but we definitely like the way Master Chief looks here and we can’t wait to see his new suit in action when 343 Industries decide to release the first slice of gameplay.

Don’t forget that we haven’t even seen who will be the main baddie in Halo 4 yet either – how long are 343 going to keep us waiting on this aspect? Check out the image of Master Chief in Halo 4 for yourself and let us know your thoughts on it. Do you prefer this new look, or did you like Halo 3 Master Chief more?