We haven’t heard any Mass Effect 4 news for a while, but that could be forgotten about this week as something very juicy has turned up indeed over on Twitter.

We are expecting Mass Effect 4 to be announced officially at E3 2015, but before that it appears that one of the Bioware developers working on the game couldn’t hide his excitement.

Chris Wynn is the senior development director for the upcoming game and he has made no secret of the fact that Bioware is now hunting for an online producer to work on the game’s multiplayer component.

Wynn even posted the listing for all to see, which you can check out here – it includes the exact job description that Bioware is looking for. 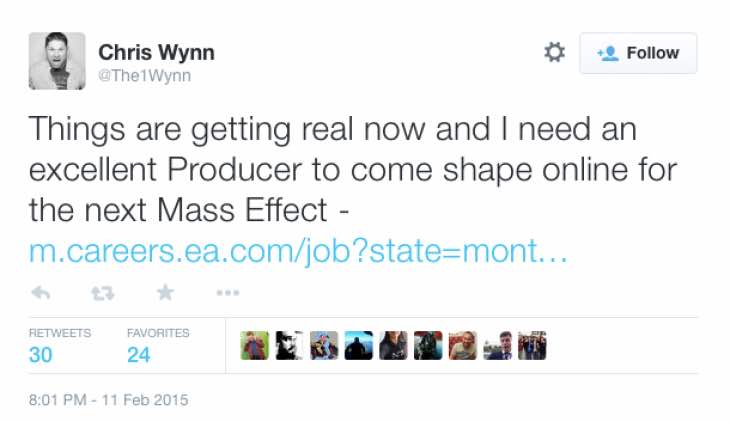 It’s nice to see that the Mass Effect 4 train now appears to be moving in the right direction. We still may not see the game launched until 2016, but still fans won’t mind waiting if it’s as good as Mass Effect 3.

Multiplayer on Mass Effect 3 specifically was very good, so more of the same for the next title and we think fans are in for a treat.

Do you have high expectations for Mass Effect 4 after playing ME:3? Let us know what you would like to see different with the new game, especially with Bioware now looking to work on multiplayer.