Trying to anticipate when the release of Mass Effect will be is very tough because there is not much of a pattern when looking at the first three games in the series. One of the reasons for this is because it was an Xbox exclusive at first, which only changed with Mass Effect 2, which came to the PS3 a year later than the Xbox 360.

However, the past two Mass Effect games were released a little over two years after each other, which would mean that Mass Effect 4 could be released around March 2014, although this is highly unlikely to happen.

We don’t expect to see ME4 anytime soon because of the fact that BioWare has a bigger task because of developing the game for next-gen, as they try to get to grips with the PS4 and the Xbox One.

Having said that, a recent Tweet, seen below, hints that the development progress of Mass Effect 4 is further along that we all expected. This is because BioWare Montreal studios general manager Aaryn Flynn said “Great time playing the next Mass Effect game in Montreal.” He also said “Ambitious. Beautiful. Fresh but recognizable, and fun.” 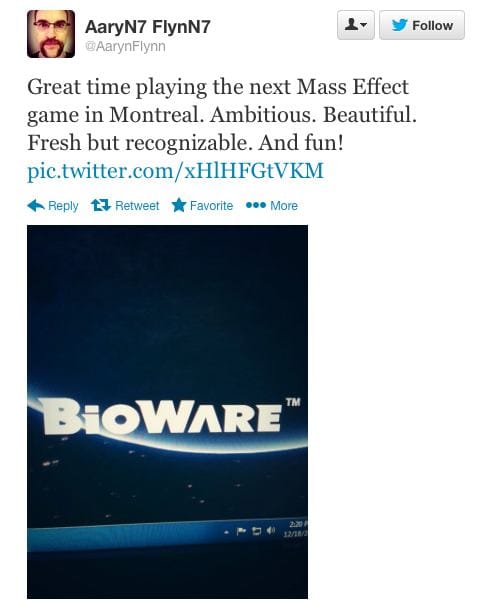 We know that when fans of the franchise see this tweet it will feel them with excitement, although you should try to contain yourself because we don’t expect to see anything of substance in regard to Mass Effect 4 news or any real gameplay until E3 2014 even though there is clearly a playable version out there.

It would be nice for a few hints, although we might already know some of the characters and also the basis of the story.