If you live in the UK and have been considering pre-ordering Mass Effect 3 we strongly advise that you pre-order your game from Game as they will be dishing out some very impressive pre-order bonuses.

Currently these bonuses aren’t showing up on the Game’s website, but Xbox360Achievements.org states that EA has announced this news according to this brief article.

If you pre-order Mass Effect 3 from Game you will get the M55 Argus Assault Rifle (a good all-round gun), the N7 Valkyrie Assault Rifle (a gun which pumps out two high calliber rounds per shot) and N7 Defender Armor – this armour not only protects you from your enemy but it also boosts your ammo capacity and weapon damage. You can see videos showing you all of the pre-order bonus content at the bottom of this page, what’s unclear is whether you have to pre-order the N7 Collector’s Edition to get all these goodies or whether the standard edition will do – hopefully we can confirm this soon. 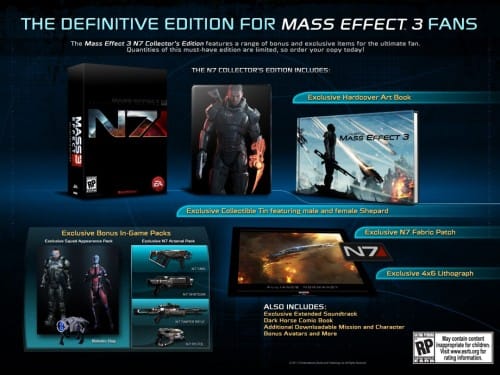 Mass Effect 3 is scheduled for release on March 6 in North America, March 8 in Australia and March 9 in Europe, we recently listed it as one of the most anticipated titles of 2012 following the success of Mass Effect and Mass Effect 2 – let’s just hope BioWare does a good job with the game’s development.

Have you now pre-ordered Mass Effect 3 yet?