EA has offered up an unexpected treat for those looking to check out the demo to highly anticipated title Mass Effect 3. The publisher has teamed up with Facebook to give Xbox 360 users the opportunity to sample the demo early, before it officially lands this week on Valentine’s Day.

If you’re a die hard fan, you may have already taken advantage of this over the weekend when the promotion first kicked off, but for those that were busy or just unaware, there’s still time for an early sneak peek 24 hours early.

To participate, all you have to do is head to the Facebook page here, install the app and input some personal details such as your date of birth and Xbox 360 gamertag. Once you’ve done that you can now try to solve a puzzle, with the prize being a code which you can take straight to the Xbox Live Marketplace to download your demo.

Solving the puzzle isn’t that straight forward though and you’ll want to take your time with it as well. If you fail at the first attempt, you’ll be locked out for two hours and will have to try again later. This process will repeat if you keep failing, so if you’re having problems solving the code then you may want to head to Twitter to see if there’s any clues from other users – and there is since we’ve seen some. 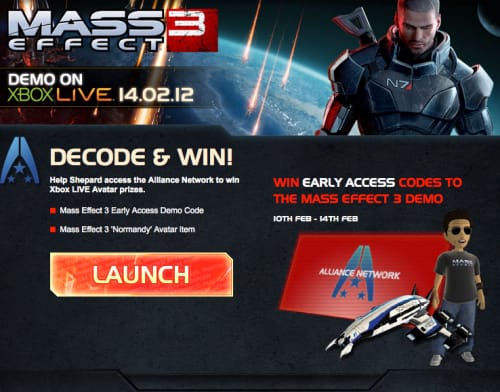 The code definitely works though, so it’s a good bit of fun if you have nothing to do and want to check out the demo early. As for the full game, a date has already been set in place for March 6, on the Xbox 360, PS3 and PC platforms. Unfortunately, this little Facebook giveaway only appears to be valid for Xbox 360 users, so no love for those of you on PS3 or PC we’re afraid. PS3 users will be able to check out the demo on Tuesday though, so at least there isn’t long to wait at all.

Have you managed to complete this little puzzle on the social networking site? For those of you that have already obtained a code, what are your thoughts on the demo itself? Is the game looking better already than ME2, or are you going to purchase the game to take a closer look?