When you think of mean, moody and black the first two things that come to mind is Batman and Darth Vader, but now we should add the new Maserati GranTurismo S to that list. Just looking at the Superior Black Edition with its special paint job and awesome looks, those two characters should reconsider what they travel around in. OK, so we are going a little over the top, but you get the meaning.

The original version was pretty evil looking, so we have to hand it to the designers who thought this one up. There have been a number of changes to giving the car a more aggressive look, and we have to say, it has worked. Anderson Germany is the team behind the Black Edition, the last time we saw a perfect team up with Italy and Germany was when Michael Schumacher was driving for Ferrari.

So let’s talk about that paint scheme first, the finish is matt black, there are only small areas where glossy black has been used, these are on the window frames, rear logo, grille and those 21-inch rims complete with 265 and 295 tires to the front and read respectively. To finish off the look the windows have been tinted, so if you are Batman no one will see you in there.

Engadget reports that Anderson has taken some of the stock parts off to replace them with their own flare, and those are the sports engine bonnet, and a host of carbon add-ons, such as exterior mirrors, inlets and roof and tailgate leading edges. What would be the point of doing all this if the car did not sound aggressive, so giving the exhaust a two sound valve command and some extra horsepower will do just nicely? 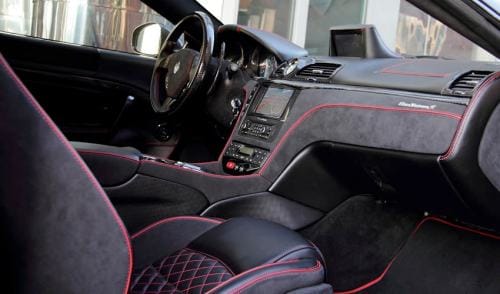 The sound of that engine and exhaust working together is like you have woken the ancient gods, and you will know just what we mean when you open the taps up on the track and feel that 492 horsepower being transferred to the tarmac. Not too certain if the interior does the exterior of the Maserati GranTurismo S justice. The reason we say this is because the all-black finish with red piping makes it look more like a boudoir on wheels. Maybe we have this car all wrong; maybe it will be more fitting for a drag queen with attitude?