It may have taken quite a bit of time and several character reveals, but we finally know the full roster for the upcoming Marvel vs. Capcom 3: Fate of Two Worlds game. Just last week we announced that Taskmaster and Akuma had been added to the list, which left two final fighters to be revealed.

According to a recent article over at vg247.com by Stephany Nunneley, Capcom has just revealed that the final two characters to be added to the Marvel vs. Capcom 3 roster are Sentinel and Hsien-ko. The developer has also released a couple of gameplay videos, which show both fighters in action.

You can view the character trailers (courtesy of Eurogamer) via the VG247 website. A few screenshots for the MvC3 game — which will be available for the PS3 and Xbox 360 on February 15th in the US and February 18th in Europe — have also been released, and can be seen on the eurogamer.net website. 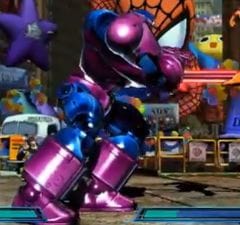 As Tamoor Hussain from the computerandvideogames.com website recently reported (via iplaywinner.com), the Hsien-Ko character comes from the Darkstalkers title, which is just one of Capcom’s many other 2D fighting games. As you can see from the video, she appears to be a combo-heavy fighter.