Marvel Vs Capcom 3 isn’t supposed to be hitting retail stores until February 15th in the US, but that hasn’t stopped the game being leaked early and as a result, we now have the final boss battle and intro videos to tell you about.

We are aware that this is a pretty major spoiler for the game, so we won’t post the videos here, but we can tell you that both videos are freely available to view over at YouTube.

Just because we’re not showing the video here, doesn’t mean we can’t say who the final boss is, and considering that it’s all over the internet already, we might as well tell you that Galactus will be the last guy standing in your way. The last fight is pretty epic and definitely worth a watch if you can get hold of the video. Are you satisfied that he is the last boss, or did you expect another bad guy to take his place?

Aside from the boss fight, someone has also leaked the entire opening cinematic for the game, and it’s over three minutes in length. It shows the likes of Ryu, Wolverine, Captain America and Co teaming up against the bad guys such as Dormammu, Magneto and Dr Doom. 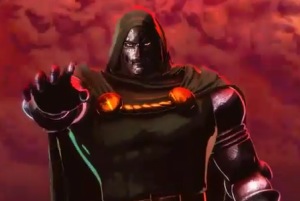 Check out the videos over at YouTube. Once you have, let us know your thoughts on the upcoming game. Who is going to be your most used character? I can see Mike Haggar from Final Fight being one of the favorites, he even has a Zangief-like final atomic buster as one of his specials.