We have some more details on the final boss to be featured in the upcoming arcade beat-em-up Marvel Vs Capcom 3, as Capcom has made things all official by giving Galactus his very own sinister gameplay trailer.

It’s uncertain whether the character will be playable in the game, probably not due to the sheer size of him during the last boss battle shown in segments below. One thing we can say though, is that the last boss won’t be an easy push over, as he’ll come with an array of highly damaging moves, which you’ll have to be skilled to avoid.

If you watch the video closely, you’ll see that his abilities include being able to summon ‘silver-surfer’ style enemies in the game, such as Albert Wesker, Dr Doom and Dormammu. Once you have disposed of them, you’ll then have to tackle Galactus himself, providing you can get close enough to hit him of course. 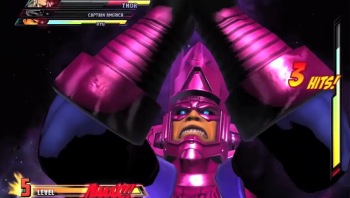 You can watch the trailer in SD below, or if you prefer, there is a link to GameTrailers here to watch it in HD. Let us know your thoughts on Galactus, you can check out some character videos here.