We have some more details on the upcoming DLC for Marvel Vs Capcom 3, and probably the most exciting yet. We are hearing that hidden code found in the game has revealed two characters which could be making their way into the roster.

According to Destructoid, a user has managed to hack a copy of the game (we’re guessing the PS3 version?) and discover a line of code which contains the names of two characters which currently are not available on the roster.

These two characters are Frank West (from Dead Rising) and Spiderman’s classic nemesis Dr Octopus. This hasn’t been confirmed by Capcom yet of course, but there are only two explanations for this:

Either both were originally meant to be part of the game’s roster and taken out, or they are going to be the first DLC characters which you’ll be able to buy, excluding Shuma Gorath and Jill Valentine here since they’re available on the special editions of the game. Take a look at the image below and decide for yourself. 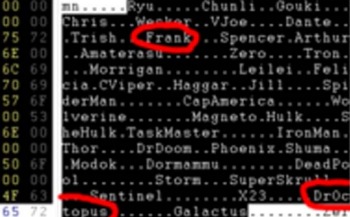 Are these two characters already on the disc and are waiting to be unlocked via a DLC code? It wouldn’t be the first time that Capcom has used such tactics. We hope these characters do arrive though, i mean come on – Dr Octopus would be a great addition to the lineup. Let us know your thinking behind the hidden code.

Don’t forget to check out the great guide showing all of the move lists for each character.