Following on from one of our recent Marvel Vs Capcom 3 articles surrounding DLC characters for the game, we now have some fresh details, as it has been reported that there are 10 characters still to be announced by Capcom.

As reported from GamrFeed, the news has come from Japanese Magazine Famitsu, who believe that Capcom will introduce 5 more fighters to either side, bringing the grand total to 40 characters if you include the two DLC characters that have already been leaked.

Assuming that the details are true and Capcom has just 10 fighters to announce, who do you want to see in the game? We know a lot of you are not too excited about the current roster, especially since they include some surprising names in there, and not any of the fighters you expected to be in from day one.

Personally, I’d like to see a few more Street Fighter characters added into the mix, mainly Ken and/or Akuma. On the Marvel side, I’d like to see Venom or Carnage, but seeing how they have thought outside of the box for the current roster, I can’t see them being included – which is a shame.

Considering that there is a Captain America movie coming up, you would have thought that Red Skull would be in there – maybe he’ll end up being one of the ten characters. 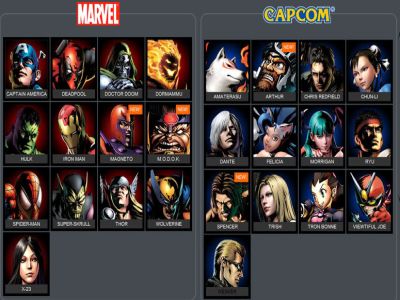 Do you have a list of 10 characters who you’d like to see in the game? Let us know your ideas below.