Out of the various game-related announcements at Comic Con 2015, we do have some interesting news for Marvel fans who are still waiting to see a confirmed Marvel Ultimate Alliance 3 release date in the near future.

While we sadly didn’t get a confirmation of the game yet, Marvel Games producer Mike Jones did say at SDCC 2015 that Marvel are still ‘very much focused’ on delivering console games in the future.

Jones added that while it takes longer to materialise compared to say mobile games such as Marvel Future Fight which is very popular right now, they could be making a console announcement next year. 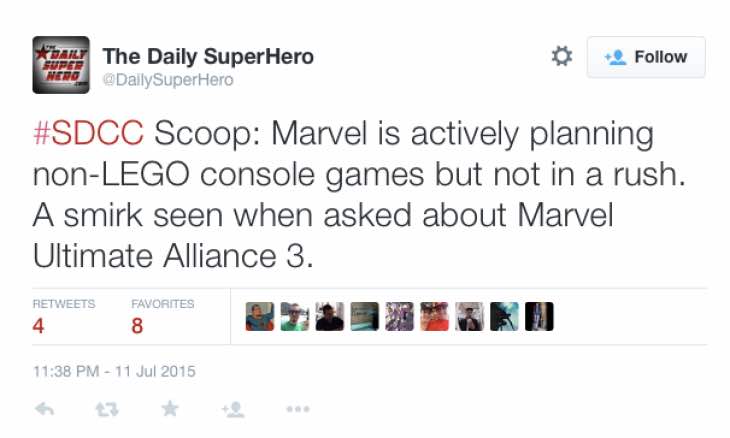 Additionally, a Tweet from The Daily Superhero suggests that a ‘smirk’ was seen from Marvel when specifically asked if Ultimate Alliance 3 was on the way.

For us, we still find it hard to believe that it hasn’t been announced yet. It is easy money all day long after the popularity of the first two games, so let’s hope that the delay is only because Marvel want to take their time finding the right developer first – avoiding mistakes of the past.

Would you throw your money at MUA3 if it was confirmed tomorrow for PS4 and Xbox One? Let us know your thoughts on this and what ideas you would have for a new game in the series – who would you pick as developer if you had a choice?