If you already own a copy of the Pinball FX 2 game for the Xbox 360, then you are probably already aware that the Marvel Pinball DLC was released onto Xbox Live Arcade today (Wednesday, December 8th). Now that the game has arrived, I thought I would take a look at a couple of reviews.

Marvel Pinball — which will be released as a stand-alone game for the PS3 – has already received a few positive reviews, with ratings such as 7 out of 10, 8.5 out of 10 and even an impressive 9.5 out of 10. Firstly though, I want to focus on a review from Matthew Keast at gamesradar.com.

Matthew notes that although there are a total of four different pinball tables — Iron Man, Wolverine, Blade and Spider-Man – featured in Marvel Pinball, Spider-Man is in fact the best. While the other tables do all have neat details and great art styles, Keast says they don’t flow as well as the Spider-Man one. 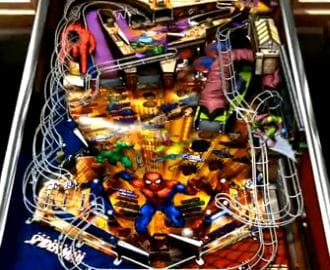 The overall rating given by Matthew was 7 out of 10. The next review comes from Richard Bassett over at reviews.teamxbox.com. This reviewer praises both the looks and the sounds of the Marvel Pinball game, and claims that it would be Christmas and birthday all rolled into one for any Marvel fan.

The final review is from Jim Cook at gamersdailynews.com, who gives Marvel Pinball a rating of 8.5 out of 10. In Jim’s opinion, all four tables are fun to play, but three of them appear better than the fourth. You can read the full reviews via the links above.

What do you think of the Marvel Pinball DLC? Which pinball table is your favorite?