Players of Marvel Mighty Heroes will have noticed that the game was completely unplayable a few days ago, due to some unforseen server errors after the most recent tournament came to an end.

The Marvel Mighty Heroes servers were down for over a day, with players unable to log in at all and play the game. As a result, DeNA initially announced some compensation to players on their Facebook page but we can tell you that the rewards have changed from what players will actually get.

A statement on May 9 reveals that the developers were planning to give all players 250 ISO, along with 450 of premium currency – which can be used towards a premium spin which costs 500 cash or gold. 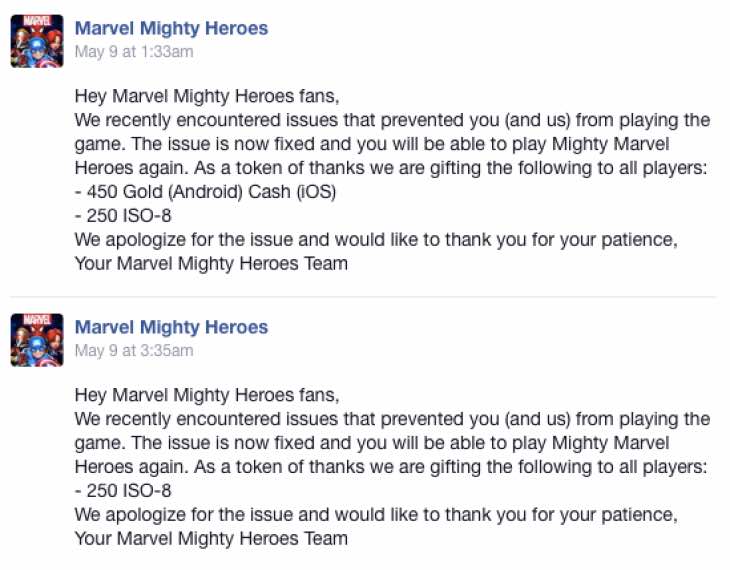 However, we’ve taken a screenshot showing evidence that the developers had a change of heart and have since decided that they don’t want to give away that premium currency anymore – even though they have just asked players to cough up $50 for a Venom.

You can head to the Facebook post in question which is still live now and see a total of four edits made by the developers since the initial publish – just click the edit history to see for yourself.

Now, when you boot-up the game we can see that the compensation package has changed again. Players will instead be receiving 1,000 ISO, although as far as we’re aware this has yet to be credited in-game.

1,000 ISO is certainly a nice prize since it can help to level up 4-star character skills, but are you more disappointed that they changed their minds over giving away premium currency?

The evidence is there in the screenshot, with the Facebook edit system coming back to haunt DeNA. Let us know what you think about this and if you are under the impression that the developers are being a little greedy with their player base at the moment.