The game developed by Gazillion Entertainment had recently been ported over to console following on from the success of Marvel Heroes on PC, but Disney sent over this statement to Kotaku which is going to be painful for anyone who has been enjoying the game over the last few weeks but at the same time, players were also in a state of confusion over missed deadlines by the developers for upcoming content updates.

“We regret to inform our Marvel Heroes fans that we have ended our relationship with Gazillion Entertainment, and that the Marvel Heroes games will be shut down. We would like to sincerely thank the players who joined the Marvel Heroes community, and will provide any further updates as they become available.”

Gazillion themselves have not commented on this on the official Marvel Heroes Omega forums, which again has angered some players who were expecting to see the statement from the developer first before anywhere else.

As a result, we don’t know the official Marvel Heroes Omega closing down date yet, but we do know that some PS4 and Xbox One players have already been successful in trying to claim a refund from Sony and Microsoft on recent store purchases.

For Xbox users, players have been successful in getting a refund as you can see here on Reddit, while PS4 users have been contacting Sony via this support chat link to claim refunds on the PS4 version of the game. We are predicting that it is going to be difficult to get any refund on the game for purchases made weeks and months ago, but if you are in the 14 day period you might have some success.

We have played Marvel Heroes Omega ourselves and had a great time with it, so it is really sad to see that the game is going to be shutting down soon. The console version had huge potential with all of the content waiting to be ported over from PC and it’s a shame that console players will now never get to see Marvel Heroes in its fullest form and with all villains playable as they were on PC.

Are you a long-time player of the game? Give us your reaction to this news, whether you saw it coming and if you have had any success in getting a refund on your purchase.

What Marvel game will you go to now for your fix?

Update: Here is the official statement from Gazillion on the game closing down. 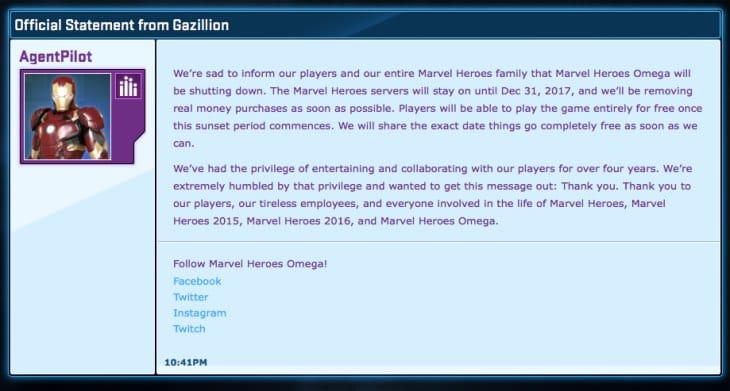 The closing down date for Marvel Heroes Omega is December 31, 2017 and the developer plans to make all content in the game free soon, so players can enjoy one last ride together.