Ultimate Alliance became a fan favorite due to its deep story mode, seamless local couch co-op play and an expansive roster from the entire Marvel Universe unlike some mobile games which still have restrictions on the X-Men and Fantastic Four.

Marvel Heroes also has a fantastic roster at launch and although it doesn’t yet match the full roster which the PC version has, we’re sure developers Gazillion will be adding the likes of Nightcrawler, Magneto and Dr Doom in due course with various events after the full rollout of the game. 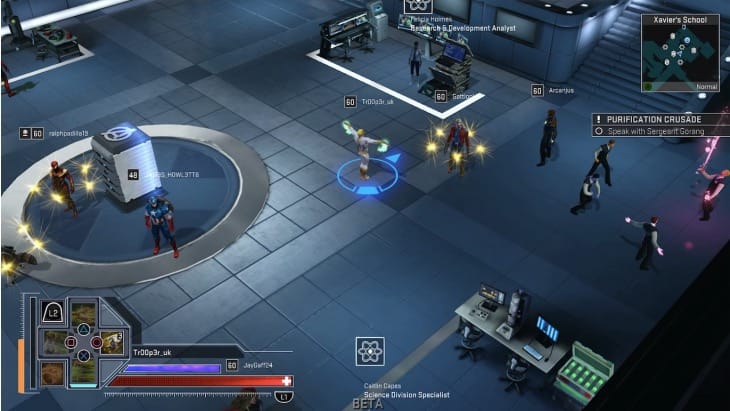 The great thing about Marvel Heroes Omega is that it is so diverse and you can play at your own pace without putting pressure on yourself to compete in the other game modes.

For example if you just want to sit back and play through the story mode with the stylish comic art cutscenes and real voice acting, you can.

Then when it is time to step up and take your player to a more competitive environment, the Patrol mode can do that which is where you can show off all of your skills with other players all playing on the same servers as you in a connected world.

We absolutely loved Ultimate Alliance, which is why we wanted to let all know fans out there who are hoping to see MUA3, that you should give Marvel Heroes Omega a go first.

It will definitely take you on a trip down memory lane and you’ll be scratching your heads as to which character to level up as your primary since each character has its own detailed skill and synergy system,  which will take you hours upon hours to max out. 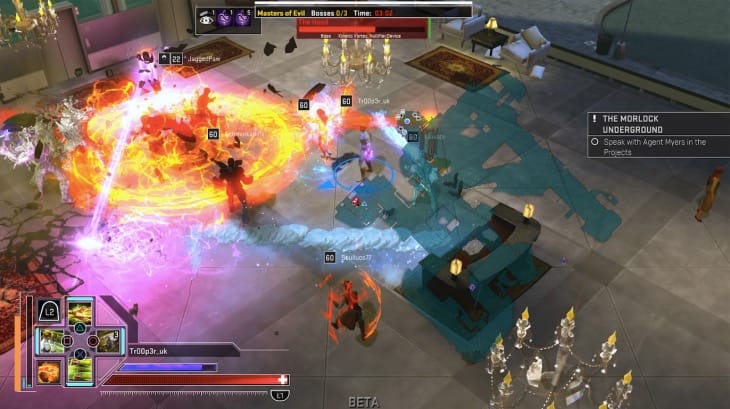 We feel like we have only just scratched the surface with this game but we can already see the promising potential that it has once the full game rolls out along with Xbox One players who will be able to play on June 30.

It is a free to play game, but you can collect Eternity Splinters frequently which is the currency needed to unlock new heroes.

If you do want to support the game and spend some real money, you can by purchasing G’s which you can use to do things such as purchase costumes, expand your inventory or purchase Marvellous Loot boxes which could win you some exclusive prizes that you can’t access in other areas of the game. 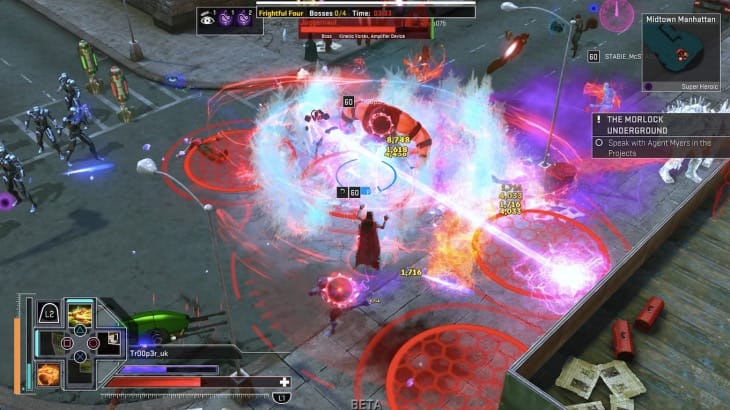 [Scarlet Witch is easily one of the best heroes in the game so spend your Eternity Splinters on her!]

Going back to the Ultimate Alliance comparisons, Marvel Heroes Omega too features a deep story mode with nine chapters which you can work your way through at any time – by yourself or with a friend.

One of the best features of this game, is that it has couch co-op meaning that you can invite friends seamlessly to jump in and out of the modes that you are playing in a connected universe. What we mean by that, is that as long as your friend is in your party you can see them in realtime on your game and if you see them jump into a teleporter to a certain mode such as Patrol, they will see you appear seconds later if they follow you in. 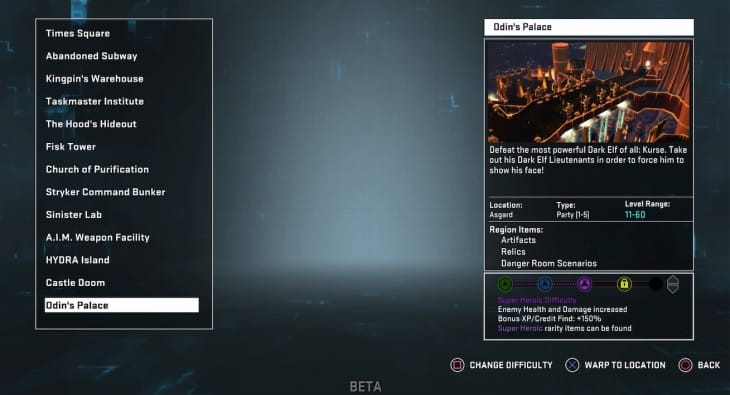 That means you need to make good use of voice chat to get the best out of the party system but it does work really well, especially in Operations if you are trying to grind out some Danger Room scenarios and need a little help.

At launch there are 36 characters to choose from, with War Machine being a PS Plus exclusive and Iron Fist being exclusive to those that buy all of the Founder Packs from the PS Store to bring the roster up to 38. 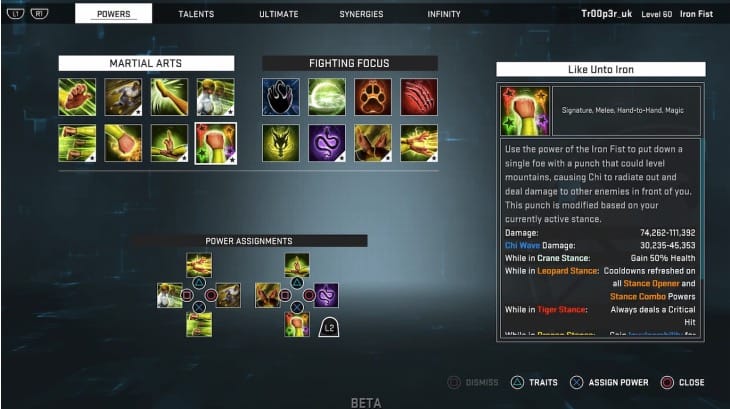 [a sneak peek of Iron Fist’s signature attack, Like Unto Iron which hits like a ton of bricks!]

We’ve already been told by Gazillion that there are plans to bring many more characters to the game soon through various events and these will include villains too such as Magneto and Dr Doom, both of which are playable on the PC version so that should be well worth the wait once it happens.

The important thing to note though is that characters can be obtained by collecting Eternity Splinters as in-game drops. As far as we’re aware, these drop every 6 minutes of in-game play at a rate of 1-5 depending on how lucky you are. You will get your first hero free after playing the tutorial but after that you need to start collecting and saving up your splinters, at the moment you either have to spend 250 or 525 on heroes that you don’t own.

We know a lot of you will be asking the question on what can you do for free and what do you have to pay for in the game. You’ll be pleased to know that Gazillion has been very generous we feel as you can still go through the main core of the game without spending if you really want to.

As most free-to-play formats, you only pay if you want to speed up your experience and this is done with real money currency which converts into Gs. With Gs you can increase your storage, buy character packs from the store, purchase costumes from the roster page or directly buy heroes if you don’t want to wait. 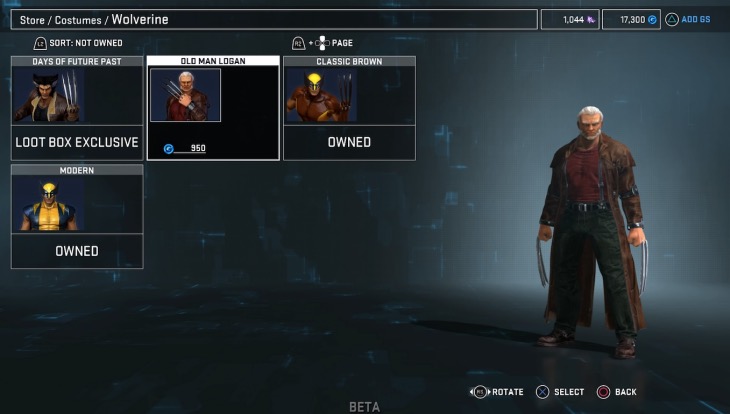 Marvel Heroes Omega has an incredible number of costumes to choose from, which you can choose to buy with Gs. As far as we’re aware, there are no direct skill changes from this uniforms as they are mostly cosmetic only. However, there are some ‘Enhanced’ costumes which Gazillion has added a few extras to it – these can include things like skill animations, different voice acting compared to other uniforms for the same character and also unique character emotes which you can access by holding down the L2 button and using the d-pad buttons. 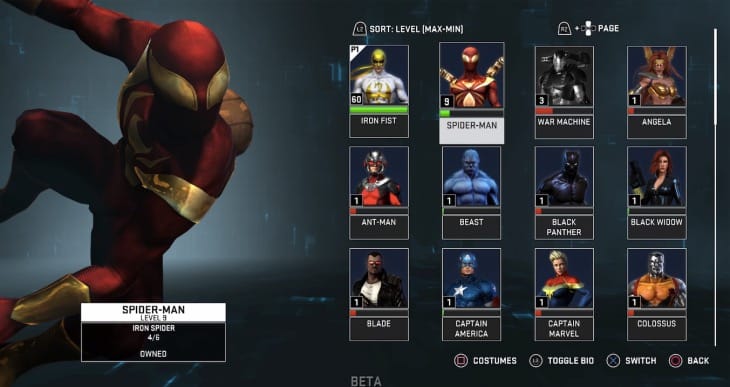 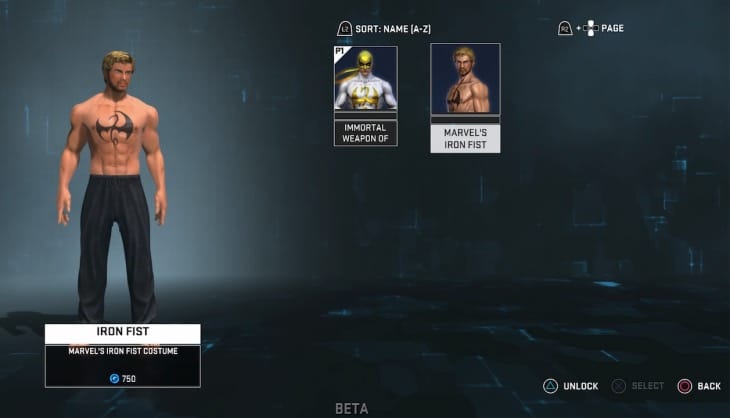 We haven’t yet fully explored the Marvel Heroes Omega end game content such as the Infinity System or Synergies as it comes to the end of open beta testing, but we can see that the game has tons of potential if Gazillion can keep up with regular updates with fresh content and events for players to enjoy. 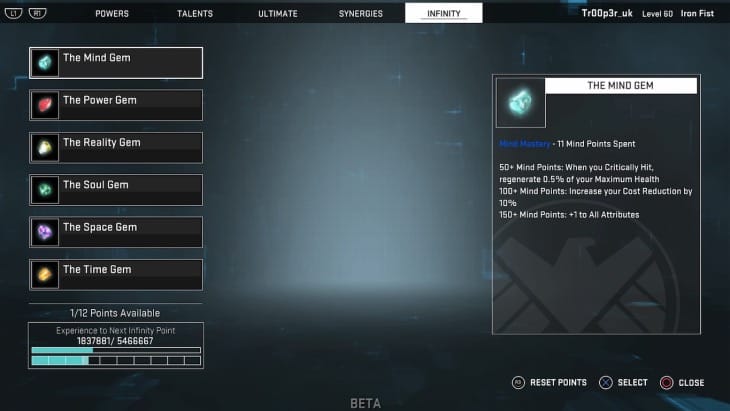 If you loved Marvel Ultimate Alliance and have been starved of a similar console game with couch co-op, Marvel Heroes Omega is surely that game and it can only get better once the game fully rolls out.

There is no better feeling that working together with a friend on a co-op Marvel game that has free licence to roam without restrictions. All of the X-Men are available along with the Inhumans, Fantastic Four and all of the movie tie-in costumes and Netflix content as well.

That means Marvel Heroes Omega will likely have content planned for the likes of The Defenders and Thor Ragnarok so players are going to be kept busy for months.

Have you started playing the game yet? If so, give us your thoughts on your progression so far and if there’s anything which we can help with.

Update 01/07/17:  This review was written during the Open Beta period. Since then, Gazillion has introduced some new changes into the way costumes are purchased and you can now find them inside Marvellous Loot Boxes instead of being able to purchase them directly. You can read full details on this by visiting the official forum post here.