We have some good news for Marvel Future Fight players now, as Netmarble has announced a new feature that is coming to the game this weekend in the form of a special event.

This event is going to be a new type of Dimension Rift, one which will allow players to face off against not one but two World Bosses.

Even more challenging, is that Netmarble state in their notes that the battles will take place, ‘back to back’ which could allude to the fact that players will have to beat two World Bosses on a single health bar. 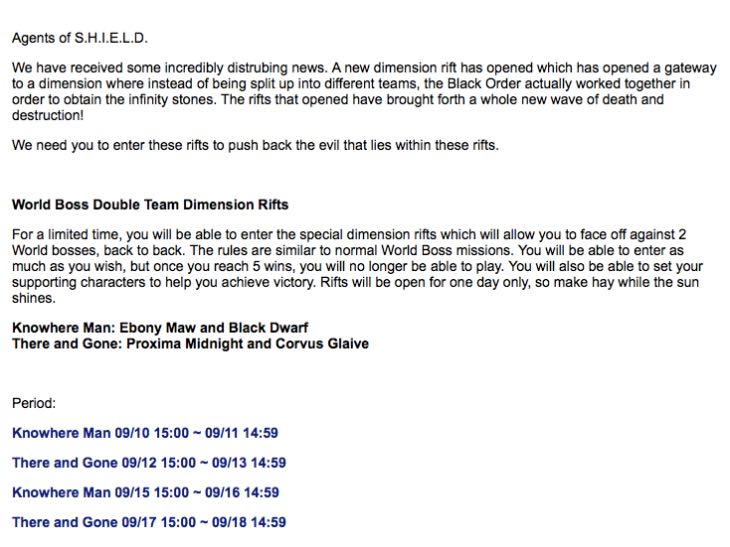 You can get the full details above, including when the new World Boss ‘double team’ rifts will start – the Rifts will be open on Saturday and Monday for one whole day with 5 clears allowed and unlimited entries.

Black Dwarf and Ebony Maw will be the first opponents, while on Sunday you’ll have to face off against Proxima and Corvus together. The same event will also be available on Thursday September 15 and also Saturday September 17.

There’s no word on what the Future Fight World Boss Dimension rift rewards will be, but players will be expecting more Black Anti-matter and Chaos Norn Stones at the very least.

Are you excited about this? How many clears do you currently have on normal World Boss mode?

Edit: It looks like the rewards will include BAM, Chaos stones, Gold, Special Gear and ISO!