Marvel Future Fight players may have been surprised lately, with the active communication shown from Netmarble with regards to community events, compared to previous months when the game would go through dry spells with little to no communication whatsoever.

It looks like Netmarble may be trying to get fans back on board however with the rollout of the huge Infinity War 4.0 patch and now we have news of a fantastic event that allows you to vote on which character you want to see given a balance update in the coming weeks.

The developers have hand picked a selection of characters for you to choose from, with the full list below including the likes of Hawkeye, Hyperion, Vision, Jessica Jones and Ghost Rider.

At the time of writing, we can tell you that Hyperion is in the lead clearly, followed by Vision so at this point it looks like those who haven’t voted need to decide between Hyperion or Vision, as others don’t appear to have a chance unless something drastic happens. 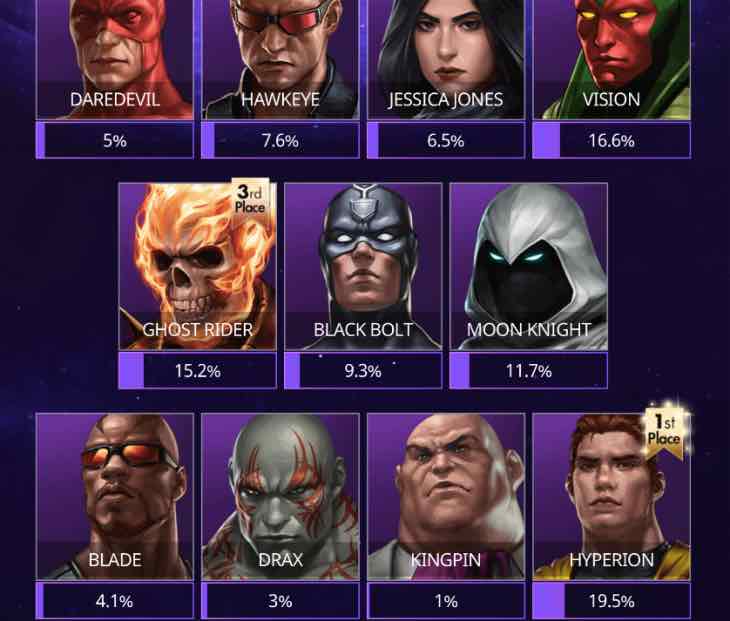 The event will end on April 30 at 23.59 Pacific Time, so you still have the rest of this week to cast your vote and make it count. To vote, all you need to do is log into the game and follow the in-game banner, it is one vote per account so have your say now.

In a nutshell, those who bought Hyperion will obviously want to see him shine, but if you are a F2P player you should now consider Vision as you will be able to enjoy a new version of him if he wins since he’s widely accessible through Biometric Selectors.

Have you participated in this event? Let us know who you voted for and why.