Marvel Future Fight gets better and better as the days go on. We’ve lost count of the amount of premium currency that Netmarble has already given away for free since launch but now we have news of another big giveaway.

Hours ago, we told you that players were having serious problems with the iPhone version of Future Fight not working. The problems almost lasted a whole day and nobody could play the game without reinstalling the application and using Facebook and Game Center to restore data.

Fortunately, it looks like most people have done that now without issue and we can see that Netmarble has come good with a very impressive compensation package. 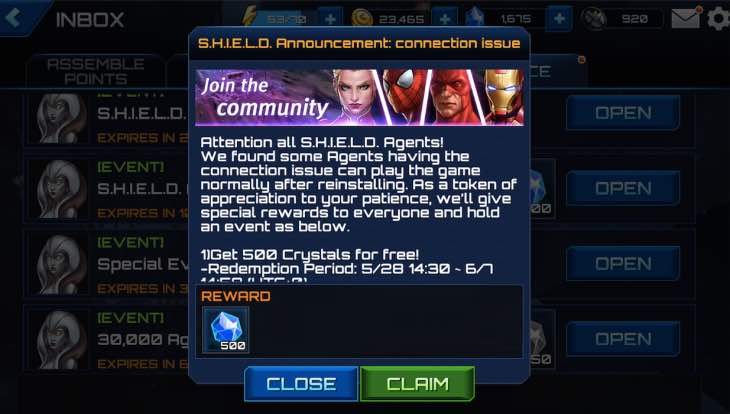 A free dimension chest would have been worthwhile, but going one better than that we can tell you that Marvel Future Fight players can now get 500 crystals for free as Netmarble’s way of saying sorry.

500 Crystals amounts to around £6 or $9 of real money and players can now use that for a whole variety of goodies in the game. Some examples include the 1650 crystal team bonus packages which are very popular at the moment, or just stock pile the crystals in preparation for the Guardians of the Galaxy.

Either way, it’s great to see Netmarble taking care of their customers. We remember when Marvel Mighty Heroes went down for a day, the developers DeNA opted against giving away premium currency for free and even changed their minds about what package to offer too.

A big contrast between the two games we have to say and right now, Future Fight is leading the way by far. If you are a Future Fight player, give us your reaction to the 500 crystal giveaway.