Following on from the recent guidelines issued by Apple, in which developers must disclose drop rates for loot box type virtual items, we have some potentially game-changing news to bring to all Marvel Future Fight players now.

As most of you should know, these are the main money makers in the game as the gear chests contain CTPs for Alliance Battle Extreme building and the card chests contain Premium Cards allowing you to increase your overall character stats.

Both chests cost 675 crystals for a spin of 10 times and now we have the official drop rates for the CTP and Premium Card chests in Marvel Future Fight for the very first time.

As expected though, it isn’t pretty viewing at all. Players only have a 1% chance of getting a rare CTP when that CTP is highlighted in the ‘Increased Chance’ rotation each week.

Cards are even worse, as the percentages show that Premium Cards have a 0.16% chance of getting the specific card you want, if it’s one on the Increased Chance rotation.

With that in mind, you should always be careful of what you are getting yourself into before spending crystals on those chests now that the drop rates have been exposed. 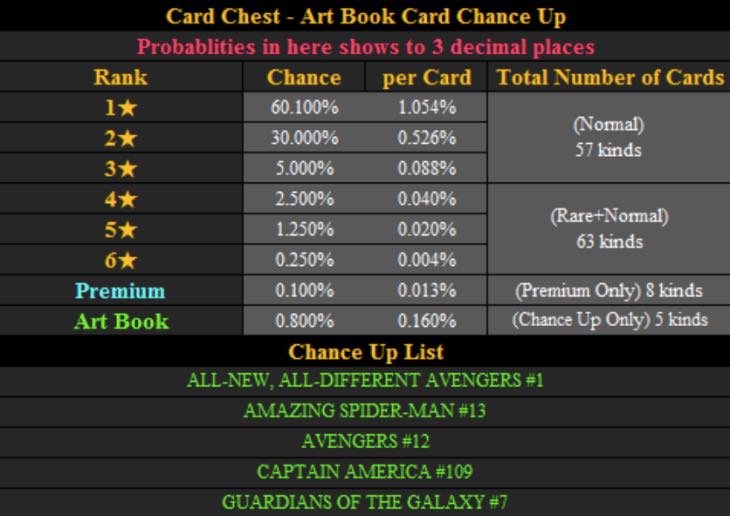 We also advise all Future Fight players to never spend crystals on the chests for a specific item that you want, unless it is on the Increased Chance list.

The Increased Chance rotation will change every week and to see the odds for each rotation, head to the following links – for Cards here and for Gear chests here.

Check out the tables above and let us know what you think about it. Are you shocked and disappointed by the odds – how many crystals have you spent on this game without getting what you want?