Attention all Marvel Future Fight players now, as developers Netmarble are going to be holding an event that you don’t want to miss out on – both for Android and iPhone players.

Marvel Future Fight has now reached the milestone of 20 million downloads. That is an incredible number for a mobile game that is still relatively new.

To celebrate, the developer are digging into their pockets and are going to be giving away 2,000 crystals for free – no catch, nothing.

All you need to do is log into the game every day to claim your bonus, just as you would with your Tony Stark Stash. Not only 2,000 crystals, but 30 free Singularity bios as well – one of the three new characters introduced with the recent Secret Wars update. 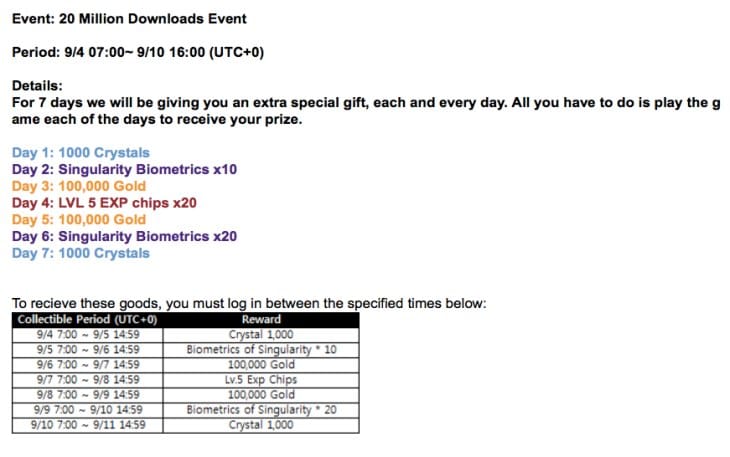 We’ve included the important information for you above, detailing the official schedule for the prizes and when you can obtain them.

Netmarble will be handing out a different prize over the course of 7 days – you just need to be playing daily to get them, 1000 crystals will be handed out first on Friday September 4.

That means of course you can buy one of the brand new Secret Wars costumes which sell for 750 crystals a piece. Given the criticism that Netmarble received over their last update which made many players unhappy – this is certainly one way to ride the tide and get fans back on their side.

Nobody would have expected 2,000 free crystals though without a catch for a free-to-play mobile game. Are you pleasantly shocked by this? Give us your reaction below.

Update: The first installment of 1,000 crystals has now gone live in-game! Head back at the same times (8am UK, 3pm HK, 12am PST, 3am Eastern) to receive a different reward for each day. 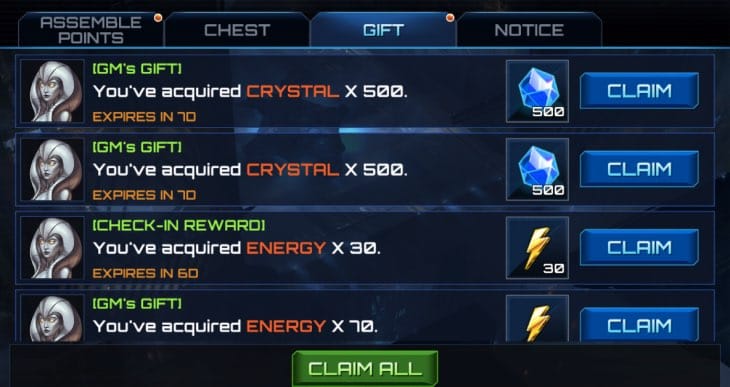