With the highly anticipated Deadpool movie hitting theatres worldwide this week, we wanted to take a minute to talk about why Deadpool isn’t a playable character in Marvel Future Fight.

Future Fight developed by Netmarble is easily one of the best mobile Marvel games you can play at the moment and hands down the closest thing you are going to get to the fabled Ultimate Alliance 3 dreams.

It has a great roster, but the Merc with the Mouth is noticeably absent and having experienced the game ourselves first hand, we are wondering why he hasn’t been included yet.

We know what you are thinking. Marvel and Fox aren’t on talking terms which is why there’s no X-Men in Future Fight at the moment. 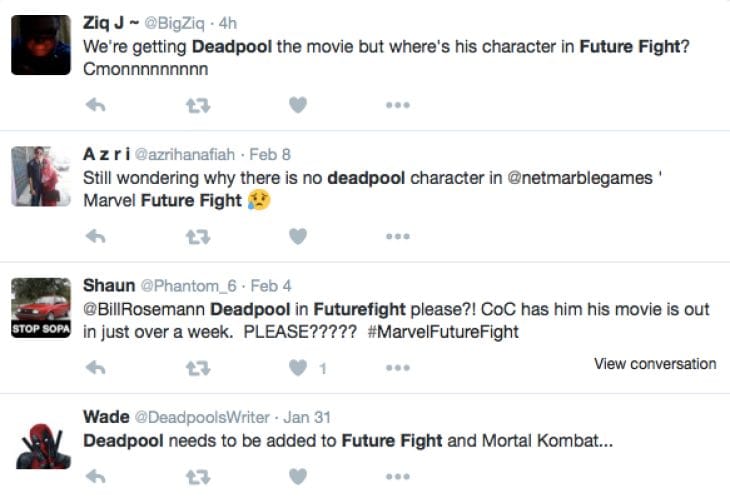 That’s a valid point, but then at the same time why is Deadpool available in Marvel Contest of Champions? Looking closer, they’ve even got X-Force Deadpool in the game as well as Venompool – but not a single sniff in Future Fight?

We can see that right now, Future Fight players are asking the same questions on social media, as well as on the official Mobirum forums. Sadly, players have tried to discuss this on the popular Future Fight Reddit page too, but for some reason the creator has banned talk about Deadpool and other Fox characters due to his own powerful agenda which also includes whispers on Spider-Man being the best character in Future Fight – shame on you.

On a serious note though, do you want to see Deadpool in Future Fight? The fans voice have ultimately resulted in the movie being made after years in development hell, so leave a comment below to pressure Netmarble into putting the character in the game.