It’s time to take a look at the new Wasp uniform in Marvel Future Fight, as we know a lot of you will be wondering if Wasp ANAD is worth buying while it is on sale for 750 crystals, as opposed to 1250.

Right away, we would say that for all serious players this Wasp uniform is recommended to buy. This is due to one major fact in that it significantly changes her 1-star skill for the better, compared to the same skill without the uniform.

When you perform her 1-star skill normally, you will notice that you are pushed backwards. This isn’t ideal for staying alive in Alliance Battle, Battleworld, Timeline and World Boss mode as it means that you are forced out of the 6-star invulnerability dome. 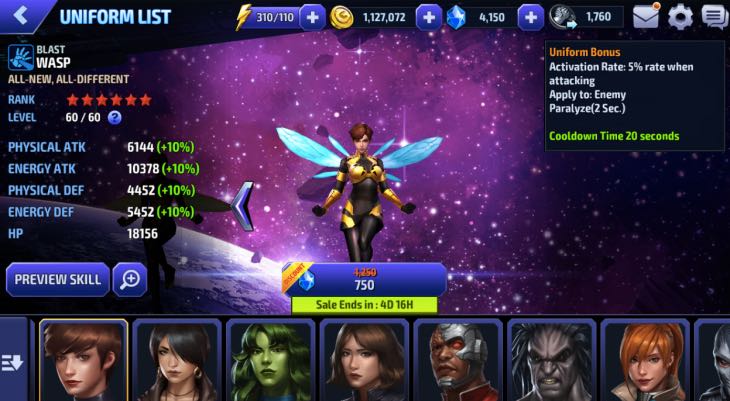 This dome is now her pride and joy and for her to be a viable character for end-game content, you need to stay in that dome at all costs.

With that said, we are pleased to confirm that with the Wasp ANAD uniform, the 1-star skill does not push Wasp backwards after using it, meaning you can stay in the dome longer to avoid damage. 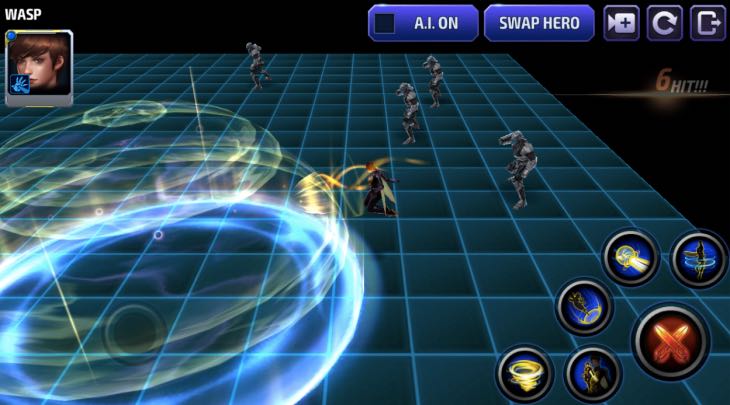 More importantly, with high skill cooldown it theoretically means that you will never get hit, by successfully chaining 5-star into 6-star, then doing her 1-star then again back into 5-star repeating the process.

We’ve added another two screenshots here, showing you what happens when Wasp performs her 1-star Disrupting Shot skill with both default and ANAD uniforms. 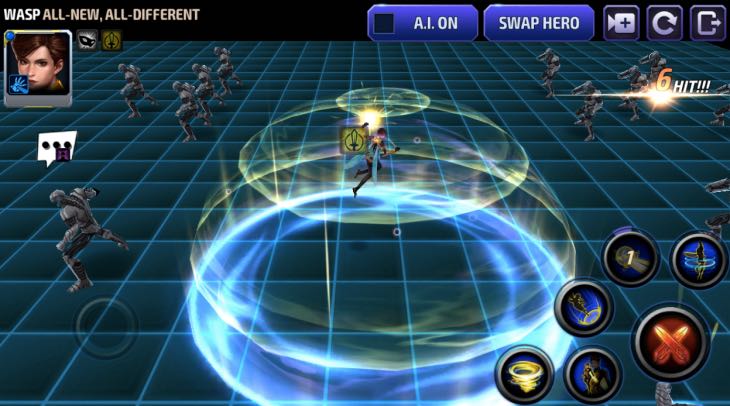 We also want to point out the benefit of how the dome will also activate your attacking and when-hit strikers in World Boss mode. You can literally just stay inside the dome and let all of your strikers take care of business.

Combine this formula with an attack iso-8 set such as Power of Angry Hulk, Overdrive or Hawkeye then a heal back Obelisk and you are really set-up to take on Thanos and Infinity Thanos using a Wasp led-team.

We’ve added a video from the community which showcases Wasp in her new uniform, just to give you an idea of what she can do. Obviously the real beauty of her skill set is when playing manually – we hope to bring you more videos on this soon.

At least now though, you have an idea how useful Wasp really is in her All-New, All-Different uniform which we say is well worth the 750 crystals.

Did this information help you out? Leave a comment below if you have anything to ask about your Wasp build. Once again, apologies to the haters out there if you already know this information – we can’t please everyone.

Do you want to see more reviews like this in the future – if so, for whom?