If you are a new Marvel Future Fight player and need help upgrading those cards, we have a very nice chart which we think will definitely help you along the way.

Having good cards is essential as they effect your character’s abilities in all areas of the game. These include Alliance Battle and also World Boss, which is the two most popular game modes in the game right now.

While you may know that the first two stats on a card are fixed, the rest are random and you have a chance to get a variety of different stats, per card tier.

Let’s take a look at the Loki card as an example from the chart below courtesy of Reddit user Scorpio0920, which is now obtainable inside Honor token card chests as of Future Fight 2.4.0.

You’ll see that you’ll always get All Attack and Skill Cooldown when upgrading this card, with the quality of the card determining how high those first two stats will be – the top is grade 7 at mythic tier, but you want to try and get a 6 at all times.

Now look at the list of possible third stats, these being Crit Damage, Dodge, Max HP, Mind Resist and Defense Penetration. You’ll get one of these stats when you upgrade your Loki card from 2 star to 3 star, so you if you aim for Max HP and don’t get it, just simply keep trying until you do as it won’t take long. 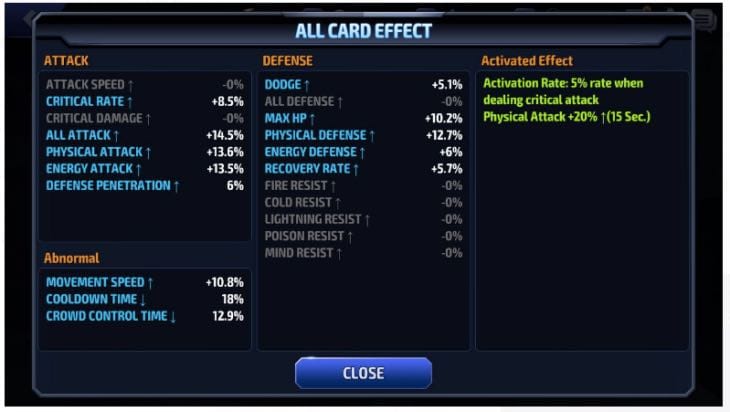 You basically want to keep doing this until you have all of the desired stats that you want, which should hopefully look something like our screenshot above when you are satisfied with all of your cards.

Make sure you bookmark this Google Doc as it contains every single possible stat, for all Marvel Future Fight cards. Even better, if you scroll to the tabs on the bottom of the chart you can see when new cards are added with each version of Future Fight.

That means you can already see all of the Future Fight 2.4.0 card stats which were added with the new Guardians of the Galaxy and Ant-Man rifts, which replaced Special Missions in the latest update.

This chart is priceless when it comes to upgrading those cards, so let us know how you get on and if the information helped you. Alternatively, if you need any help with world boss – leave a comment below as we have 3/5 clears on Infinity Thanos so far!