We have some very interesting rumors to bring you now, following on from the release of patch 2.3.0 for the highly popular Marvel Future Fight.

It has been revealed that due to some tinkering with the game’s internal files, new cards have been spotted inside the MFF 2.3.0 game code.

These Marvel Future Fight 2.3.0 cards are brand new and are part of something called the ‘Artbook Commemoration Mythical card chest’.

You can take a look at the leaked data below, showing the brand new cards and more importantly three fixed stats for the cards which we have not seen on any other card in the game. 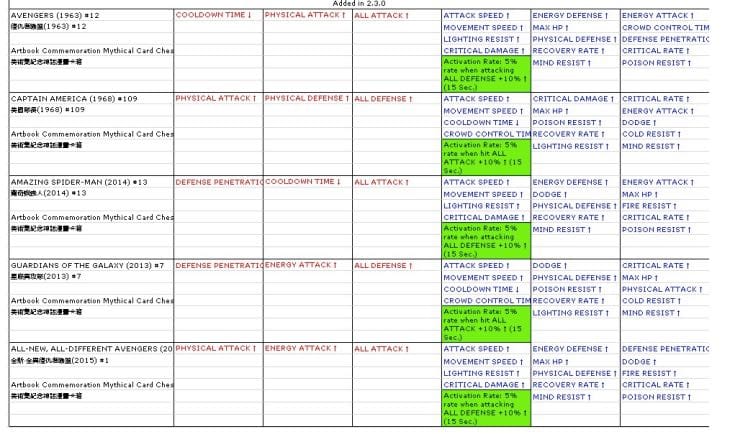 Furthermore the stats themselves are pretty amazing, suggesting that these cards are going to be the new premium cards to get and only available in a mythical card chest costing either real money or a lot of crystals.

Given that the recent legendary card chest was priced at 1250 crystals for 3 cards, we have a feeling that this may be around 2500 crystals or more for these rare 6-star cards.

That All-New, All-Different Avengers card has base stats of Physical Attack, Energy Attack and All Attack, making it the mother of all cards to aim for.

The obvious question is when will these cards be available officially in the game and will they be available with crystals or locked away to real money only similar to Carnage and Hyperion?

Give us your thoughts on this and we’ll update you when we have more information to share on this rumor.