We now have the information you have all been waiting for – the Marvel Future Fight 1.7.0 patch notes which are now live on Netmarble’s Mobirum website.

We alluded to the fact that a new suit for Daredevil was coming based on a leaked image originating from Reddit and now we can officially confirm that as being true.

Without further ado, the Netflix Daredevil suit is coming and will be known as the ‘Devil of Hells Kitchen’ suit. The big surprise though is that Doctor Octopus is getting a uniform as well which will transform him into Superior Spidey.

Another surprise is that Heroic Age Iron Fist aka New Avengers Iron Fist is coming too. The other costume available is one that was already leaked – another Agents of Shield variation of Daisy Johnson costing another 750 crystals.

Finally there are major character revamps to 10 characters, along with Universal character buffs and something you will also be very happy about – a change to the Chaos and Honor shop rotation, so we hope you have been saving your tokens! 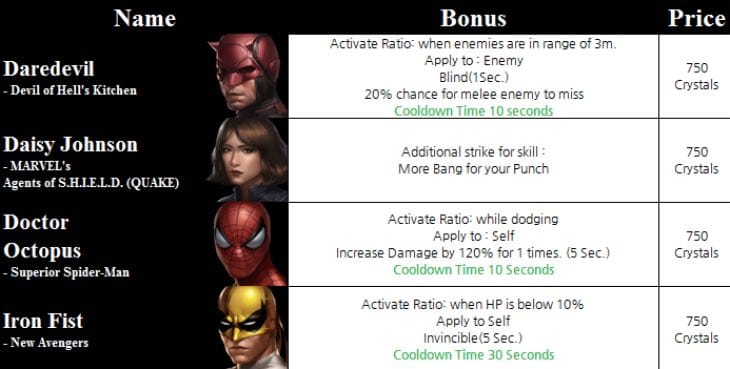 Head to Mobirum to check the full Marvel Future Fight 1.7.0 update notes and give us your reaction below.

As for the Future Fight 1.7 update maintenance times, this should be happening at 1PM Hong Kong time, 12PM Eastern Time, 9am Pacific Time and 5PM for those in the UK.

Maintenance will last the usual six hours, so expect Marvel Future Fight to be back up at 7am Hong Kong time (Wednesday morning), 6PM EST, 3PM PST and 11PM in the UK.

So there we have it, let us know your thoughts on the update and which specific new content you are most excited about. How many crystals do you have to spend?