We have some very surprising news to bring to Marvel fans now and unfortunately it’s not good. Marvel Avengers Alliance Tactics is shutting down, only months after launching. There has been no explanation from Disney or Playdom on the matter, with players now venting their fury on how to claim back spent gold.

If you are familiar with Marvel Avengers Alliance, which is a separate game, you’ll be aware of Playdom’s format. Either spend countless hours grinding to your hearts content to unlock content and resources, or spend real money to purchase gold and get the job done quicker. 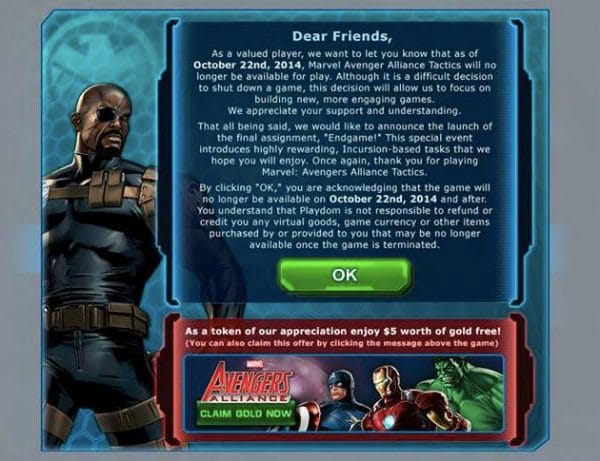 Aside from that general statement which the developer released when booting up the game, here’s what else we found on Playdom’s support pages:

“It is a difficult decision to shut down this game, but this will allow us to focus on building new and more engaging games. We appreciate your support and understanding. Please understand that support for this title will be limited leading up to its closure and issues that would require additional assistance and or game fixes, will not be addressed prior to the shutdown. Please note that Playdom is not responsible for providing refunds or credits for any virtual items, in-game currency, or other items that may be no longer available once a game is shut down. More information may be found in our Terms of Use.”

That statement about the developer not being responsible may be worrying for those that have spent a lot of gold on the game. Believe us when we say we’ve played MAA frequently and know how addicted some players are, by pouring hundreds of dollars if necessary, just for ‘virtual’ bragging rights – it’s somewhat disturbing.

To those that are trying to get their money back, we say good luck to you as Disney has been shutting down several other Playdom games recently – including Pirates of the Caribbean.

The official Avengers Alliance Tactics shut down date is October 22 2014, so you’ll be able to continue playing until then. If you have been playing daily, give us your reaction to the news – especially if you have poured real cash into the game.

How do you feel about this – are you worried that the same treatment may ultimately hit Avengers Alliance on Facebook?