It has been a long time coming for Marvel Avengers Alliance players, but now we are pleased to reveal some fantastic news. There is going to be a MAA Halloween event and it will come in the form of Avengers Alliance Spec Ops 22, a new event giving you the opportunity to recruit none other than Blade.

The Daywalker has to be one of the most popular Marvel characters ever and his inclusion in Avengers Alliance has been a rumor for more than a year now.

We actually told you about this rumor last year which suggested that Blade would be added to the game eventually and now it looks like that image leak was right all along. 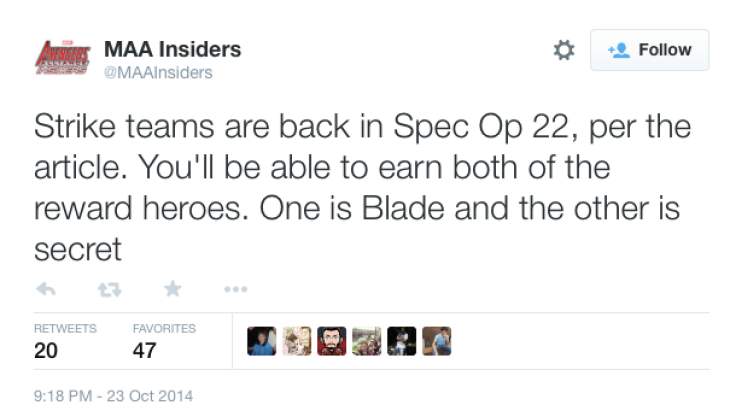 Spec Ops 22 is is going to bring back Strike Teams as we saw with the Horsemen of Apocalypse event. It means that you will carefully have to conjure up a strategy to ensure that you have an adequate team with multiple bonus potential, in order to take down each mission successfully.

The big difference compared to the Apocalypse event, is that this one will have two reward heroes to unlock. Last time players received Iceman, but now we know that Blade is the new hero – while the other one is being kept a secret.

Rumors are suggesting that it could be Morbius, but we’ll have to wait and see. We’re also interested to see if there will be a 4th mission to play through like the Apocalypse event – Playdom recently admitted that Spec Ops 16 was the best event yet in terms of creativity.

What is your reaction to Blade coming, any predictions for his abilities?