With all of the transfer news surrounding Marco Reus to Liverpool at the moment, we thought we would take a look at the talk that is happening within the FIFA scene. This is a player who is in high demand at the moment and also a player that EA are expected to upgrade with their upcoming FIFA 15 player rating upgrades.

With each new release, EA’s team pick out a vast amount of players who they believe deserve a rating upgrade from FIFA 14. Some players are obvious choices, others are not but Marco Reus is a player that is almost certain to get an upgrade.

In FIFA 14, he has a decent 85 rating but some fans out there have already predicted that he will be given a FIFA 15 upgrade to at least 87. One prediction that we are focusing on comes from YouTuber KytoxHD who has provided an excellent video for us to take a look at. 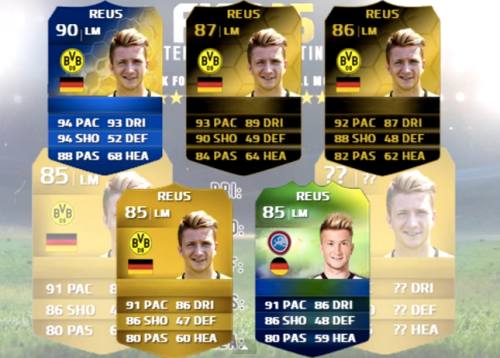 It shows a potential Marco Reus FIFA 15 upgrade to an 87 card, meaning that he has individual upgrades to a 92 for Pace and an 88 for Dribble, which is amazing for a prospective 87 card.

In the other image which we’ve provided here, it also shows all of the personal FIFA 14 cards that Reus acquired during the season for Dortmund and Germany – so it’s a no brainer that EA is going to upgrade the player given that he already has a stunning 90 card for being in the team of the season.

The big question on everyone’s minds though, is where Reus will be playing next season. Will it be Liverpool which rumors suggest, Manchester United which remains an option or a move to champions Bayern Munich?

If you have been following the Reus transfer rumors and are a daily FIFA player, let us know if you also agree that a FIFA 15 upgrade is a certainty for this player. Is an 87 a safe bet?