The battle of Manchester United Vs Arsenal football club is performed on many fronts that include the real world pitch, in video games, virtually through websites, and also on social media like Facebook and Twitter. Website, app, and social tracking service SimilarWeb asked the question – Who is crazier about their team, Arsenal or Manchester United? They backed up their findings with stats and figures.

Taken from data received between April 20 to May 17, 2015, the data is as follows. Arsenal FC has 10.4 million website visits a month compared to Manchester United FC’s 9.8 million, although Arsenal receives way more direct attention to their website at 56% compared to 27% for Man Utd.

In terms of social visits, Man Utd take the lead with 24% compared to Arsenal’s 13%. The Findings can be seen in full within the image below, so take a look to see how fans interact with these football clubs according to SimilarWeb. 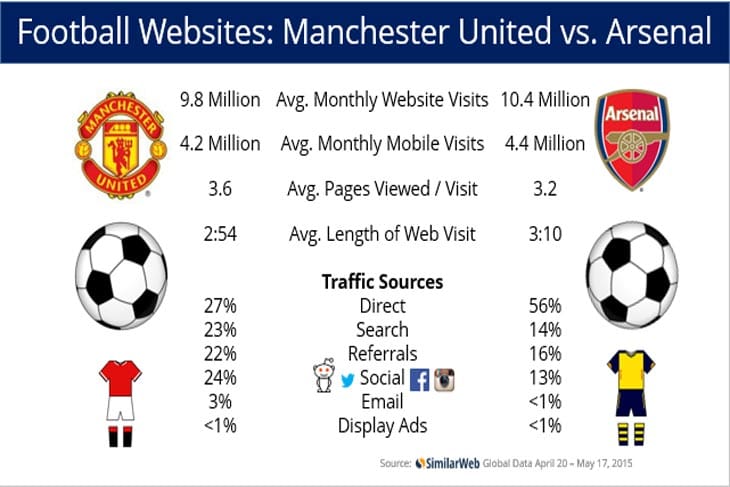 Bottom-line: These stats reveal United fans less active on their FC’s virtual pitch compared to what the Gunners are on their teams site. The difference comes with social media, due to United fans supporting their club more on the likes of Twitter, Facebook, and Reddit.

Arsenal fans make more visits every month to their team’s website and this is the same on both desktop and mobile devices. Also, the Gunners fans stay around longer on their teams site and visit directly more than twice that of Manchester United fans. What do you think this social and web data reveals about Manchester United, Arsenal, and the fans?