EA has released their list of FIFA 17 5 star skillers this year, a vital list which all FIFA 17 Ultimate Team players will treat as their own personal bible.

Once again, there is some big shocks and one of the biggest has to be Leicester City champion Riyad Mahrez who has been given a monster upgrade by EA. From being a Silver 73 card, he’s had a massive +12 upgrade to 85 on FUT 17 and now becomes one of the highest rated players in the Premier League.

Not only that, but he’s been upgraded from 4-star skills to 5-star skills which is absolutely huge in terms of what moves you can do on the pitch to beat opponents. 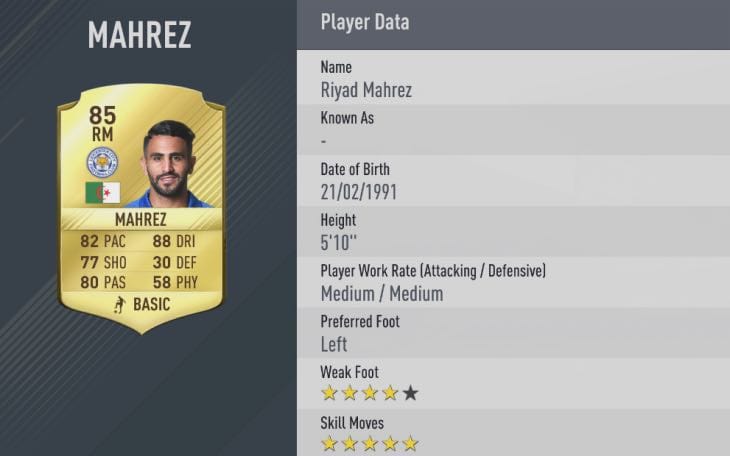 We can see that some are debating whether Mahrez deserves such an upgrade, but then again there’s no argument that he was the standout player last season along with Jamie Vardy.

Elsewhere on the 5-star skills list, players such as McGeady, Bolasie, Neymar, Ronaldo, Pogba, Boufal and Ben Arfa are included – you can see the full list here on EA’s website.

Are you shocked to see Mahrez given a +12 upgrade and an upgrade to 5-star skills? There are many other players who deserve a big upgrade, but have been ignored – which ones would you put into this category?