Users in Europe have stumbled across a great way to watch TV using apps. The latest trend is down to the Magine app for Android and iPhone, which allows users to watch live TV anytime and anywhere – including catch-up TV.

This kind of service is hard to find on an app, which is why users are getting very excited about Magine. Unfortunately it is only available in Germany, Spain and Sweden right now but the developers have already promised that more regions are coming soon and more channels as well.

As most of you have guessed, the reason for this is due to content licensing, which can always be a tricky affair with copyright issues always on the horizon – look at the recent and massively popular Cartoon HD app as a prime example.

Those who are able to try Magine TV however are absolutely loving the service. It offers popular channels such as Eurosport, BBC World, Bloomberg TV, Sport 1 and Nickelodeon. These are available for free to all Magine subscribers, but there’s also an option to pay for other packages such as a kid’s TV package with many more to come. 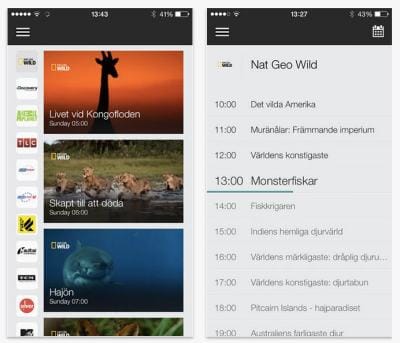 This kind of service, including the ability to rewind and fast forward TV directly on the app is getting everyone talking at the moment. It will be interesting to see if this new platform can go on to be a success, then we may see Magine thinking about expanding to other countries to provide consumers with Magine US and UK TV channels.

It is early days yet though and the app has only just launched. You can sign-up for a beta here, although it looks like Magine are not accepting any more users for now due to heavy demand. You can however still sign-up and the developers will contact you when space is available.

Have you tried this app yet after being able to beta test? If so, give us your thoughts on it so far and whether you predict this could be a success in the UK and US.