Are you enjoying Madden NFL 15 at the moment? The game is now available to buy after a long wait and now we have an initial heads-up to bring you on potential Madden NFL 15 PS4 Vs Xbox One graphics differences.

We think the game looks absolutely fantastic in terms of visuals, as EA Tiburon has done a great job with the lighting effects. Having said that, we have already seen some comparisons suggesting that the Xbox One version of the game significantly looks better than PS4, with EA choosing to put more lighting effects than on PS4.

This is a bold claim of course, but one analysis conducted by PastaPadre shows evidence suggesting that this is true. In the two screenshots that we have added from them, it clearly shows that the lighting effects on the Xbox One version in the same moment of the game – looks better on Xbox One that it does on PS4. 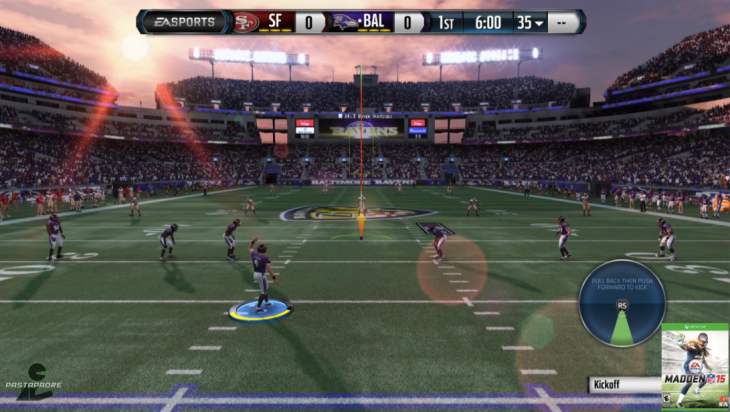 Firstly take a look at the sunlight beaming down from the sun on the Xbox One version and then secondly look at the sunset to the right of the sun. We do not see the same effects on the PS4 version, so has EA favored Microsoft’s version on this occasion?

Graphically the Xbox One version of Madden NFL 15 has the edge over the PS4. Apparent when side-by-side. Will have screens to show tomorrow

We don’t want to make any accusations but the differences in the pictures speak for themselves. We also know that EA currently has an exclusive agreement with Microsoft on certain EA Sports games so make of that what you will.

Examine these screenshots here and let us know what you think. Do you agree that the Xbox One version clearly looks better than PS4 or not?