Now that we are two days into the Madden 15 cover vote for round 2, it’s clear that C. Newton leads on one side with R. Sherman on the other. They are both closely followed by A. Luck and C. Kaepernick, although understand that this news is an update on May 17 and written after this article was originally published just before round 2 started. You can see a snapshot of the Madden 15 cover vote round 2 towards the bottom of this page.

The Madden NFL 15 cover vote is about to enter round 2 with results from the first stage being revealed within the next day, so you can be sure to see if your favorite choice made it through the first round of this annual event. The players being considered for the Madden 15 cover and needing your votes include the likes of Alshon Jeffery, Richard Sherman, Alfred Morris, Antonio Brown, A.J. Green, and Nick Foles. The full list of 16 players are showcased in the picture below.

Madden 15 cover vote date by round – You will have until June 6 when the voting ends, although the players will be narrowed down through each of the 4 rounds. The first round ends today with the second lasting until May 22, then the third round will run May 22-30. You can join in voting for the finals starting May 30 and this final round will end on June 6, as mentioned above.

EA Sports has given Madden NFL 15 a release date of August 26 in the United States, followed by a launch 3 days later in Europe and the UK.

Do you have any players in mind that you want to see go through into round 2? If the second round has began already, then who should not make it through this round in your opinion? Leave a comment below, and let us know who you think will make the best cover for Madden 15.

The official Madden 15 trailer launched 2 weeks ago and we’ve embedded the 30-second video below this article, just in case you missed it or want to take a look one more time. You can leave your Madden 15 cover vote on this page of the espn.go.com website. 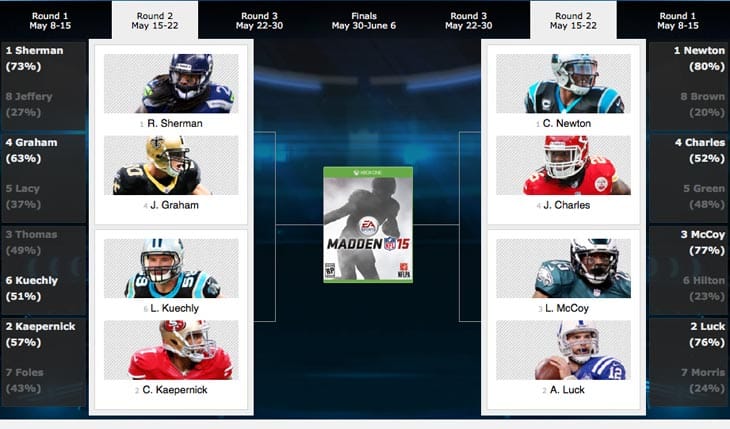 Update on May 17: You can see a screenshot above that reveals a snapshot of the Madden 15 cover voting that’s currently in round 2, although there’s still 5 more days to go into we move to round 3.