As you are probably aware today is the North American release date for EA Sports’ Madden 12, each year Madden games see massive sales, therefore we are sure a lot of you had it this year’s instalment on pre-order, today we will sum up reviews to try to tell you whether Madden 12 is worth buying.

GameRevolution, JoyStiq, WorthPlaying, 1UP and IGN have posted reviews for the game and on the whole it has received a pretty good reception – by the looks of things the game doesn’t differ too much when you compare the Xbox 360 version with the PS3 version, so lots of critics have just reviewed one platform version of the game. 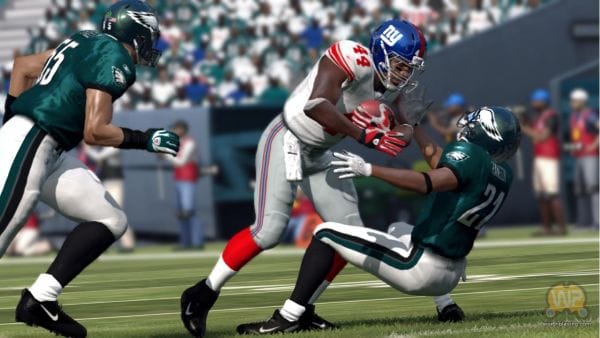 GameRevolution gave Madden NFL 12 a B+ score, they said that the soundtrack and collision system were great, however didn’t like the lack of old mini-games and poor commentary. You can see their full review here.

We like IGN’s reviews and following hands-on time with the Xbox 360 version of Madden NFL 12 and gave it 8 out of 10. They also criticized its fragmented and repetitive commentary, but in terms of graphics, presentation and gameplay the game impresses – to sum their review up they say that small improvements have been made to every aspect of the game – check out the full review here.

You can see JoyStiq’s review here – they give it 3.5 stars out of 5. 1UP scored it a B- here and finally WorthPlaying say that it deserves 9 out of 10, their review can be seen here and “wholeheartedly recommend Madden NFL 12 to gaming football fans”, they do say that there are some AI issues, but in terms of graphics they were very complimentary.

You can see more reviews of the Xbox 360 version of the game here and the PS3 version of the game here. At the time of this post 17 critics had submitted reviews to MetaCritic for the Xbox 360 of Madden 12 resulting in a metascore of 79 / 100, whilst ten PS3 reviews have been averaged out and resulted in a score of 80 / 100 – which suggests that there is not much difference in the two platforms.

Have you got your copy of Madden 12 yet? If so, are you impressed?